The Market Has Broken Out Above A 3-Month Horizontal Resistance Level. Next Level – SPY 115

As I have been mentioning recently, the longer the market held the 200-day moving average, the greater the likelihood of a breakout above SPY 113. On a lackluster news day, we got that breakout. The S&P 500 has been grinding higher since the opening bell and we have broken through a three-month horizontal resistance level. The next challenge is major resistance at SPY 115.

Bulls have been waiting for a pullback so that they can buy into this rally. Stocks are relatively cheap compared to bonds and investors are shifting money into equities ahead of the November elections. Asset Managers do not want to miss a year-end rally and they are aggressively bidding for stocks. In a month, Q3 earnings season will also kick off and the price action ahead of those releases has been bullish for four consecutive quarters.

If the market can break out above SPY 115, short covering could push it up to the highs of the year. This is a very tradable rally but don’t get over confident. There are still major issues that will weigh on the market and the rug can get pulled out from under you at any moment.

There aren’t any major economic releases this week to spoil the rally. Initial jobless claims have been improving recently and even though the jobs recovery is dismal, the market seems content at this level of unemployment. Durable goods orders have declined in recent months, but the number is volatile and traders tend to take the release with a grain of salt. The FOMC will meet this week and they are likely to keep their rhetoric the same. Conditions are not improving as quickly as they had hoped and they stand ready to do what is necessary to keep the recovery on track.

In a few moments, President Obama will address Americans in a town hall meeting. His ratings have slipped in the polls and he wants to defend his policies ahead of the November elections. Political analysts suggest that Republicans will do well in November and Obama does not want his party to lose representation. We can expect many speeches in coming weeks.

Look for a gradual move higher this week. I like stocks that have good earnings and have been beaten down to a support level. They have the most room to run and they should bounce during the next leg of this rally. Tech and medical devices are two areas I like. I am buying calls to limit my exposure. Option implied volatilities have declined and the premiums are reasonable. I am keeping my positions relatively small. If we do get a pullback in the next two weeks, it is likely to be brief. Asset Managers are anxious to “buy in” and they will support this market. 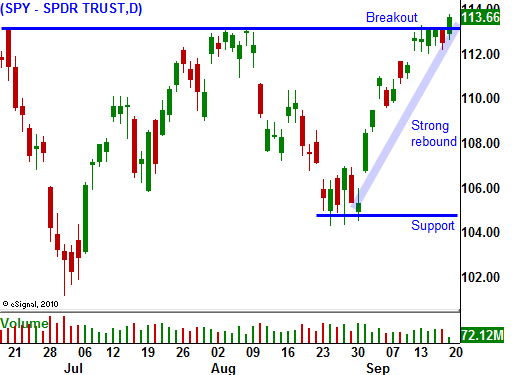