Treading Water – The Market Needs To Gather Strength For A Breakout.

The market has rallied 8% in less than three weeks and it looked a little tired this morning. It has ignored deteriorating economic data and weak seasonality for good reason. Interest rates are at historic lows and stocks are attractively priced.

This week, the FOMC released its statement. It gave the market exactly what it wanted and stocks were able to push through horizontal resistance at SPY 113. They cited weakening economic conditions and they hinted that quantitative easing (QE2) might be around the corner. This policy would weaken the dollar and that would help our exports.

This morning, initial jobless claims came in at 465,000. Last week’s number was also revised higher and both pieces of information weighed on the market. As long as the unemployment scene does not deteriorate, the market seems poised to move higher. In this jobless recovery, money is shifting out of bonds and into stocks.

Tomorrow, durable goods orders will be released. This is a very volatile number and traders tend to take it with a grain of salt. The demand for big-ticket items has declined 3 straight months and worst-case scenarios are priced in. The economic calendar will be quiet in the early part of next week and then starting Thursday, it will build.

On September 30, GDP, initial claims and Chicago PMI will be released. On Friday, personal income, consumer sentiment, construction spending and ISM manufacturing will be released. GDP was revised down from 2.4% to 1.6% a month ago and analysts expect it to remain at 1.6%. It should not have much of a market impact. Perhaps the most interesting number will be ISM manufacturing. It increased more than expected last month, contradicting Empire Manufacturing, the Philly Fed and Chicago PMI. I believe it will decline and last month’s number will be revised lower.

China’s PMI will also influence trading Friday morning. The Chinese government halted steel production for 20 days, fearing an inventory buildup. If this number is anywhere near 50, the market will decline. All hopes of an economic recovery are tied to China. This is truly the one potential “fly in the ointment” that could spoil this rally.

In two weeks, ISM services, ADP Employment, initial claims, wholesale inventories and the Unemployment Report will be released. ISM services fell to 51.5 and that is just above the level that signals economic contraction. The service sector accounts for 80% of our economic activity and it is a very important number. Jobless claims have been improving slightly and that should bode well for the employment number.

Asset Managers want to buy stocks ahead of the November elections and they do not want to miss a year-end rally. They are rotating money out of bonds and into stocks. Corporations are employing a similar strategy. They are issuing cheap debt and they are using the proceeds to buy back stock. Large companies like Microsoft (that have piles of cash) are doing this and it is bullish for the market.

Interest rates in Europe are rising and that is a future warning sign. The demand during recent bond auctions has been strong and fears of a European credit crisis have eased.

On a technical basis, the market is right up against major resistance at SPY 115. If it breaks through that level, it could easily run to the highs of the year. The year-end rally will come early and I am expecting the momentum to stall after the November elections. That will also take us into the first two weeks of earnings when the strongest companies will have posted results.

Asset Managers are waiting for a pullback so that they can “buy-in”. Everyone is lined up with the same game plan in mind and that means that any pullback will be short and shallow. Today’s price action was a classic example. You would expect a nice pullback when the market has rallied 8% in 3 weeks. This morning, we broke below horizontal support at SPY 113 and that should have sparked a round of selling. Within an hour, the market rebounded. The bid to this market is strong.

If the market just sits here for a few days (likely since we don’t have any economic releases early next week), buyers will get anxious and they will bid more aggressively. The only potential spoiler is China’s PMI next week. If we get past that, we will breakout.

Companies that have pricing power (chemicals, commodities) are performing well. Option implied volatilities are cheap and I am long calls. I will buy more on a market pullback or a breakout above SPY 115. 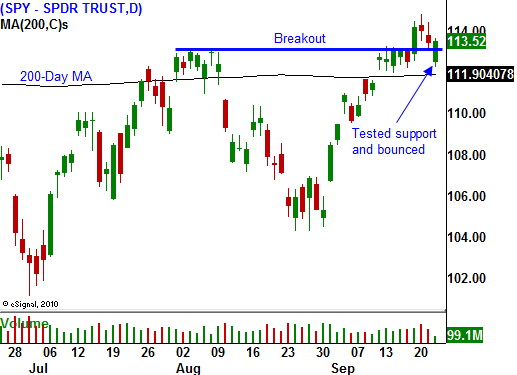