A Close Above SPY 115 Would Be Very Bullish – Stay Long Until Thursday!

Without question, this market wants to go higher. Yesterday, it was able to shrug off a negative initial jobless claims number and it rallied after a negative open. Late in the day, sellers were able to push the market a little lower. After rallying 8% in three weeks, you would expect to see a little weakness.

This morning, the market was poised to open higher and then a favorable durable goods orders number sparked a massive round of buying. The overall number was a little weaker than expected, but business spending improved and that was the focal point. Last month’s decline in business spending was reversed this month. Overall, the number was not remotely strong enough to justify a 20 point rally in the S&P 500. There are other forces at work.

As I’ve been mentioning, Asset Managers have been waiting for a dip so that they can “buy in”. They are getting more and more anxious every week that passes without a decline. They don’t want to miss a year-end rally and two backstops that are giving investors confidence. Surveys suggest that Republicans will win elections in November and the Fed stands ready to ease if conditions worsen.

Bond yields are at historic lows and stocks are attractively priced. The market has tended to move higher ahead of earnings season and releases will start in a few weeks. Money has been shifting out of fixed income and into equities.

From a technical standpoint, the market has been able to hold the 200-day moving average and it has moved above minor resistance at SPY 113. Major resistance lies at SPY 115 and we are knocking on the door. A breakout above that level would spark additional buying.

The first three days next week will be very quiet from an economic release standpoint. That means there is nothing to stand in the way of this rally. The big news item to watch for next week is China’s PMI. It will impact trading next Friday morning and it is the only potential snag. The entire world is counting on China to pull it out of this recession. If their economy falters and the PMI declines to a level that is lower than 51, selling well ensue. It would take a number below 50 for a major selloff to occur.

One bad data point alone won’t do it. We need to see two or three negative numbers. China halted steel production for 20 days fearing an inventory buildup and the PMI could be weak. The selling pressure will run its course quickly. China has been stepping on the brakes and all they need to say is that they will stop tightening. Once they do that, markets will rebound.

I would not trade off of this number, but it will be wise to take profits on bullish positions next Thursday. We’ve had a tremendous run and we are due for a small pullback. If you look at a one-year chart, we have been stuck in a range between SPY 105 and 115 for most of the year. When you have profits and you’ve reached the top end of a long term range, you should scale back positions.

Until then, stay long. A breakout above SPY 115 will carry the market higher. If we are able to close above that level for a few days, it will become a support level. Take some profits before Friday. I am finding nice trades in tech and healthcare. 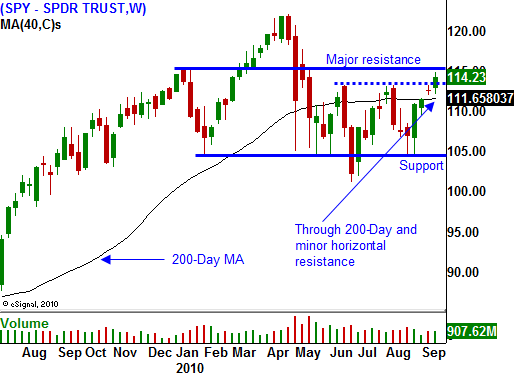