Scale Out of Long Call Positions The Next Few Days. Friday Could Pose Risk!

The economic news through Wednesday is pretty light and that favors the bulls. Tomorrow, consumer confidence will be released and is likely to disappoint, but weakness is factored in. Heavy overhead resistance is likely to stay intact because we need a major catalyst to push us through.

On Thursday, GDP, initial claims and Chicago PMI be released. GDP was lowered from 2.4% to 1.6% and analysts expect that level to be maintained during this week’s revision. That means GDP probably won’t have much of an impact. Initial claims rose slightly last week to 465,000. The market was able to take that in stride and as long as we are around the 460,000 level, we probably won’t see much of a selloff. Chicago PMI has been slipping, but the market has ignored the number.

Friday could be troubling. Thursday night, China’s PMI will be released. The government halted steel production for three weeks fearing an inventory buildup. This number could create a serious selloff if it falls below 50. That decline would be sharp and short-lived. China has been putting the brakes on its economy and it just has to stop tightening for the market to rebound.

Asset Managers are looking for an opportunity to get long and a sell-off like this would give them a window. They want to buy stocks ahead of the November elections and earnings season. With each passing week, they become more fearful that they will miss a year-end rally and they will bid for stocks.

Overseas weakness this Friday morning would provide a negative backdrop for our economic releases and it could compound fear. After the open, consumer sentiment, construction spending and ISM manufacturing will be released. Consumer sentiment has been weak and a bad number would simply add to pessimism. Construction spending has been dismal and it is also likely to disappoint. ISM manufacturing could be the “straw that breaks the camel’s back”. Last month it rose unexpectedly and it went against the Entire Manufacturing Index, the Philly Fed and Chicago PMI. I believe last month’s number will be revised lower and this month’s reading has the potential to miss estimates.

Traders will be happy to take profits heading into the weekend when major economic releases are due the following week. The SPY 115 resistance level is strong and except for a small breakout in April, that level has held for a year.

Once the market pulls back, support will be established in coming weeks. Then, it can make a surge through resistance. The Fed is back-stopping the market and it is ready to launch another round of quantitative easing (QE). November elections, earnings season and the typical year-end rally are also positive influences. Stocks are attractively valued relative to bonds and money should rotate from one asset to the other for the next month.

Danger looms and I will not let myself get overly bullish. This is a good week to take profits. The market has run up 8% in a matter of weeks and it is hitting major overhead resistance.
Problems still loom. Economic conditions are deteriorating, quantitative easing has not been effective, interest rates in the PIIGS are rising (default risk) and US deficits continue to grow. Consequently, I don’t see any reason to stick my neck out.

If we pull back to the 200-Day MA (SPY 112) and that level holds, I will play the upside and potential break out.
This week I am scaling out of long call positions. The market looks a little soft this morning, but we are likely to see late day strength. I am not expecting much action the next two days and I advise taking profits. 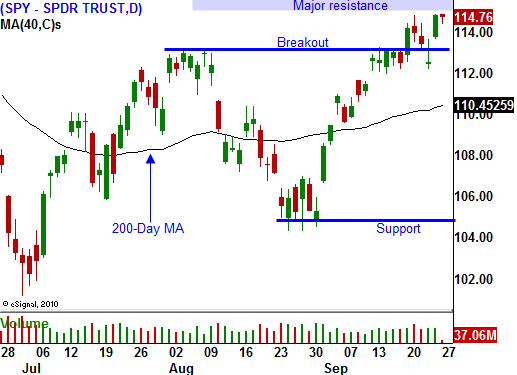