Watch For Another Assault On SPY 115 Today. Buy Calls On A Late Day Breakout!

Yesterday, the market got a round of friendly economic news and it surged higher on the open penetrating major resistance at SPY 115. Initial jobless claims were better than expected, Q2 GDP was revised .1% higher and Chicago PMI was better than expected. Sellers capitalized on the early pop and they took some money off the table.

As the day progressed, the market was able to grind back to neutral territory. The last two days of the third quarter are usually weak as Asset Managers window dress portfolios. The economic news yesterday was good, but perhaps not good enough to justify a significant breakout to the upside.

This morning, China released its PMI and it was much better than expected. It came in at 53.8 when estimates were 52.0. Even monetary tightening by the Chinese government has not slowed manufacturing. As long as China continues to grow at a fast pace, bulls will embrace the idea that one country can pull the rest of the world out of a recession.

The market is running higher on the open and it will assault the 115 level again today. If it can close above that level and hold it for two days, we will see another nice rally. Asset Managers who have been waiting for a pullback will get nervous. They don’t want to miss a year-end rally and they will aggressively bid for stocks ahead of earnings season and the November elections.

In a few minutes, we will get ISM manufacturing. It jumped higher last month and it was contrary to all other manufacturing releases. I am expecting it to get revised lower, but I’m not expecting a major market decline. The number should still be acceptable and consensus estimates are 54.8. If it comes in anywhere near 54, this rally will continue. Construction spending and consumer sentiment are both expected to be weak and any surprise would be to the upside.

Initial jobless claims have been improving in recent weeks and I believe next week’s employment releases will be dismal, but acceptable. The market has been able to deal with flat economic conditions; it just doesn’t want to see rapid deterioration.

The big number to watch will be ISM services. The service sector accounts for 80% of our economic activity and it was very weak last month. This number will be released on Tuesday and if we can get past it, the rest of the week should be market friendly.

Stocks want to move higher. Bond yields are at historic lows and stocks are attractively valued. Credit concerns in Europe have subsided and they should not spoil this rally. The structural issues overseas will continue to fester and they will reach a breaking point in the future. For now, money will rotate out of fixed income and into equities.

If we break out above SPY115, buy calls. The energy sector looks attractive. The dollar is getting smashed and oil is moving higher as a result. These stocks have lagged and they have room to run.

Look for a late day rally and a breakout above SPY 115. 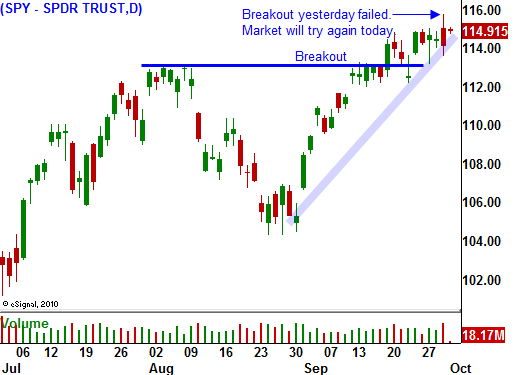