As you can see in today’s chart, the market has fallen into a very tight one point trading range during the last six days. After a huge run-up, prices are consolidating. Major economic news lies ahead this week and one way or the other; the market will break out of this range.

Some analysts argue that the market’s inability to break through SPY 115 is a sign of weakness. I look at it from the other side of the coin. After an 8% rally in three weeks, the market was due for a pullback, but bears were not able to push prices lower. Profit-taking has not been a factor and Asset Managers are looking to get long ahead of November elections and earnings season.

Last week, the economic news was decent. China’s PMI was stronger than expected, initial jobless claims declined, GDP improved slightly and Chicago PMI rebounded nicely. The market broke through major horizontal resistance at SPY 115 on Thursday and it was quickly turned back. Traders are reluctant to buy stocks at the top of the range ahead of the Unemployment Report.

Tomorrow, ISM services will be released. It dropped dramatically in August to 51.5. The service sector accounts for 80% of our economic activity and this is a very important release. The reading sits just above 50, indicating economic expansion. Consensus estimates are 51.8 and any number above 51.5 should be “market friendly”. This is the most important number of the week from my perspective. It declined much more than expected last month and another miss would spark a selloff. If we can get past this number, we should breakout to the upside.

On Wednesday, ADP employment will be released. It measures employment in the private sector. This number is important, but traders tend to discount it. ADP has shown much slower growth in the private sector than the government’s calculations. I trust it more because they are actually processing corporate payrolls and they also don’t have a political agenda. Corporations have to start hiring to keep this recovery alive. Consensus estimates are for 18,000 new jobs.

The Unemployment Report will be released on Friday and analysts are looking for zero job growth. Private sector job growth is expected to equal job losses in the public sector. Initial jobless claims have been coming in at a decent level and I am expecting a benign report. The market has been able to shoulder weak economic news and as long as the release is not horrible, buyers will step in.

Stocks are attractively valued relative to bonds. Balance sheets are flush with cash and companies are buying back shares. Many dividend paying stocks have yields that are higher than ten-year U.S. Treasuries and they offer capital appreciation. Money will rotate out of bonds and into stocks as long as economic conditions are stable.

China’s growth is intact and fears of a European credit crisis have temporarily subsided. These are potential spoilers, but they are not a factor at this time.

I believe the market will try to pull back ahead of the numbers and it will probe for support. Worst case scenarios will get priced in and that will leave room for an upside surprise. If the results are much better than expected, we will slingshot through resistance. Asset Managers have been waiting for a dip and once support is established, they will aggressively bid for stocks. That leads me to believe that any decline will be short and sweet.

As I have been saying, buy the dip or buy the breakout. Judging from today’s action, you will have an opportunity to buy calls when support is established this week. The market is drifting lower today and we are seeing a little profit-taking ahead of the releases. Watch for support at SPY 113 and SPY 112. 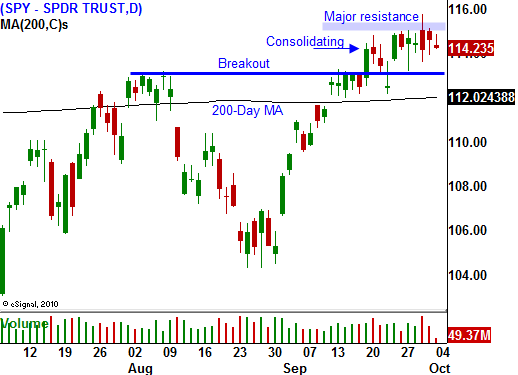