Yesterday, the market took a bit of a breather after trying to break through major resistance at SPY 115 last week. A small round of profit taking set in ahead of ISM services. As I have been saying, any decline would be swift and shallow.

Asset Managers are getting nervous. They have been waiting for a pullback so that they can buy into this rally. With every day that passes, it is less likely that we will see that decline. They don’t want to miss a year-end rally and they are bidding more aggressively.

This morning, the one possible spoiler was released. A month ago, ISM services fell much more than expected to 51.5. The service sector accounts for 80% of our economic activity and it is an important number. Consensus estimates were 51.8 and it came in at 53.2. The market is trying to break through SPY 115.

A positive tone was set before this number was released. Japan lowered its interest rates from .1% to arrange of 0%-.1%. That move is comical, but it does send a message. They are trying to devalue the yen so that their export business and continue to grow. Many analysts feel that this will prompt the Fed to launch another round of quantitative easing. A race to devalue currencies would be extremely inflationary.

Europe rebounded nicely when the Eurodollar was crushed earlier this year. They will also want a cheap currency. China pegs the Yuan the dollar to keep their currency low. Interest rates are at historic lows and money is cheap.

Tomorrow, the ADP employment index will be released. Most analysts expect private sector job growth will outstrip public sector layoffs. ADP processes payrolls for corporations and they will reveal the strength (or weakness) in private sector employment. Even if the number comes in below expectations (18,000 new jobs), the market is likely to discount the number. On the other hand, if private sector employment is better than expected, the market will surge higher. The bottom line is that stocks want to move higher and any surprise will favor the upside.

Initial claims have been improving in recent weeks and that bodes well for Friday’s Unemployment Report. Analysts are expecting zero job growth and the market is satisfied with the current employment scene. As long as conditions are stable, the market will rally.

Overseas concerns have also subsided. China’s growth is on track and their PMI came out better than expected last week. Credit concerns in Europe loom, but a sovereign default could be many months away.

Earnings season is a couple of weeks away and stocks have rallied ahead of the releases during the last four quarters. If the market is able to break through SPY 115 and it closes above it this week, a rally will ensue. Traders will buy the breakout and Asset Managers will rush to get in.

The market has fallen into a very tight trading range during the last two weeks. It is consolidating and the next move is likely to be explosive. I still feel that we could test the highs of the year before the end of the month.

Buy calls and focus on stocks that have recently broken through horizontal resistance. The top candidates will rise to the top of the Live Update table. I believe this rally will continue and we will close above 115 today. 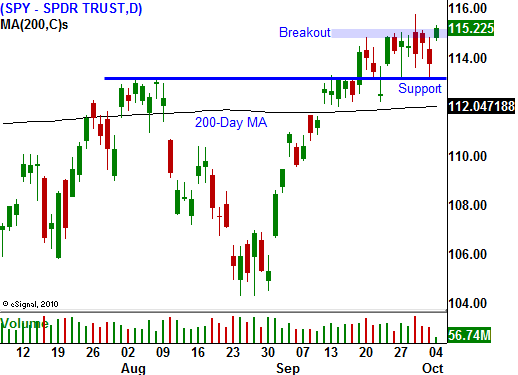