We Have A Breakout! Stay Long and Use SPY 115 As Your Guide.

Yesterday, the market shot higher on news that Japan was initiating another round of quantitative easing. Traders believe that this will prompt the Fed to ease again as both nations fight to keep their currency cheap on a relative basis. Stocks broke through major resistance at SPY 115 and they closed near their highs.

Asset Managers who are under allocated will feel the noose tightening around their necks. They have been waiting for the dip that never came and now they are scrambling to get long. They do not want to miss a year-end rally and they know that the November elections and earnings season will provide upside momentum.

The market is able to deflect bad news. As I mentioned yesterday, the ADP employment report would be ignored if it was negative. Analysts were expecting 18,000 new jobs in the private sector and 39,000 jobs were lost. We know that the public sector will suffer more layoffs and the private sector was expected to offset those losses. Corporations are not hiring and that will eventually weigh on the market.

In a separate report conducted by Challenger, Gray & Christmas, employers said they planned to lay off 37,000 workers in September. That is up 7% from August.

For now, the market has ignored the releases and it is moving higher. In the last two months, the government’s private sector employment estimates have been higher than ADP’s. I trust ADP more because they are actually processing corporate payrolls and they don’t have a political agenda. Nevertheless, the market trades off of the government’s release. Their number is likely to be higher than ADP’s and the disappointment on Friday could be small. That is my interpretation of today’s non-reaction.

Consensus estimates for the Unemployment Report are for flat growth. Private sector job growth is expected to offset public sector job losses. As we’ve seen today, the market will move higher as long as the news is not horrible.

Overnight, Fitch lowered Ireland’s debt rating from AA-to A+. Its economic outlook is shaky and the government has had to recapitalize banks. This news was expected and it did not spoil a rally in Europe.

Now that the market has broken out above major resistance, the next up leg can begin. We need to see a close above SPY 115 for a few days and if we can get through Friday’s number, the stage will be set for another rally. I believe we could challenge the highs of the year by the end of the month.

You should have bought calls on yesterday’s breakout and you should have a full position. If the market closes below SPY 115, take half of the position off. If this level holds, be patient and wait for the next rally. When the upward momentum starts to wane, scale out of your call positions. I plan on being out of all of my long positions as we challenge the highs of the year. Should that unfold, I believe all of the good news will be “baked in” and I want to have a clean slate to work with.

After a huge run-up yesterday, I believe the market will chop around today. Initial claims won’t provide too much action tomorrow and they should come in around 460,000. The action is likely to calm down ahead of Friday’s number and we might be in for two boring days. Be patient and use SPY 115 is your guide. 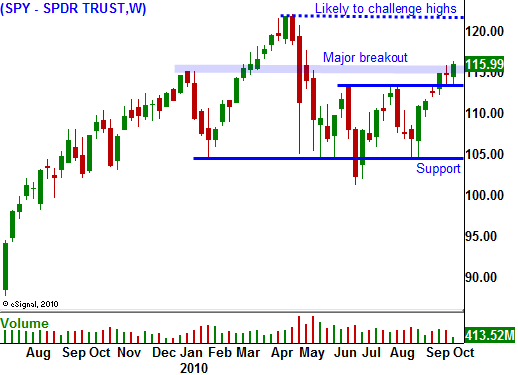