The market has broken out above major resistance at SPY 115 and it has been able to hold that level for two days. If it can tread water and get past tomorrow’s Unemployment Report, it will rally to the highs of the year in the next few weeks.

The economic news has been improving. Chicago PMI, ISM manufacturing, China’s PMI and ISM services all came in better than expected. This morning, initial jobless claims dropped 11,000 to a seasonally adjusted 445,000. That marks the fourth week of steady improvement. Retailers have been reporting strong numbers and 80% have posted sales gains. On average, retail sales rose 2.8% in September and that topped analysts’ estimates.

Tomorrow’s Unemployment Report is expected to show flat job growth. Private sector gains are projected to offset public sector job losses. If this actually transpires, the market will rally off of the number. Yesterday, ADP reported that the private sector lost 39,000 jobs when consensus estimates forecasted 18,000 new jobs. The market shrugged this news off. ADP has been lower than the government’s estimates for three straight months. If tomorrow’s Unemployment Report comes in better than -50,000, I believe the market will move higher.

Initial jobless claims have been improving and the market will latch onto that silver lining. Economic numbers that would normally “disappoint” have been taken in stride. Asset Managers are anxious to buy stocks ahead of earnings season and the November elections. They have been waiting for a pullback and they never got one. Now that the market has broken out above major resistance, they are scrambling to get long. They do not want to miss a year-end rally.

Earnings season officially kicks off this afternoon when Alcoa posts its numbers. Basic metals have been improving and Alcoa recently broke through $12 resistance. It is trading near the low end of the range and it has room to run. Banks don’t start announcing until later next week. This sector could post weak numbers, but that is already factored into the market. IPOs have been light, trading volumes are extremely low and financial reform will soon bite into profits. Semiconductors have lagged the market and they could be the catalyst for the next leg of this rally. The big releases will start the week of October 18th.

The economic and earnings news is light next week and that favors the bulls. The momentum is strong and if the market can survive tomorrow’s Unemployment Report, it has nothing standing in its way. I expect the next two weeks to be bullish and I will take profits on call positions as we approach the highs of the year. I believe all of the good news will be “baked in” by the time November election results are posted.

China’s growth is intact and credit concerns in Europe have temporarily subsided. These are two potential spoilers for this rally and I don’t believe they will come into play the remainder of this year. Stocks are cheap relative to bonds and money will flow from fixed income into equities. Any decline should be swift and shallow. It will present a buying opportunity and Asset Managers will be bidding for stocks.

There are many long-term issues that keep me from being overly optimistic. As 2011 rolls around, unemployment, structural deficits and higher taxes will weigh on the market. For now, if the SPY is above 115, stay long. 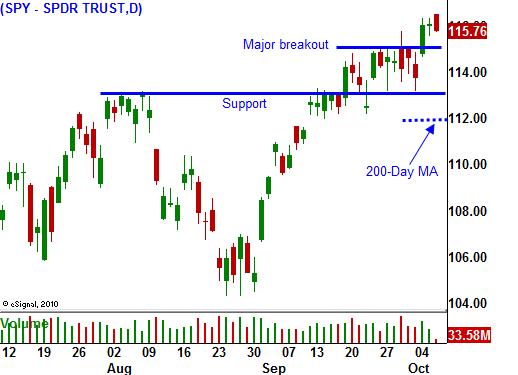