As long as the news isn’t horrible, it’s good. The long awaited Unemployment Report was released this morning and it was weaker than expected.

Consensus estimates were for flat job growth. New private sector jobs were expected to outpace public-sector job losses. During the month of September we lost 95,000 jobs. Private sector payrolls added 64,000 new workers and the public sector lost 159,000. Census workers accounted for 77,000 of the government layoffs and 50,000 teaching jobs were lost at the local level. Augusts’ number was revised lower by 15,000.

Normally, a miss of this magnitude would spark a significant round of selling. When the number came out, S&P 500 dropped 10 points. Within a matter of 10 minutes, it raced back into positive territory.

Traders are focusing on private sector job growth. Corporations (not the government) need to drive this recovery or it will not be unsustainable. What troubles me is that the ADP employment report contradicts the government’s release. ADP actually processes corporate payrolls and they do not have a political agenda. They showed that 39,000 jobs were lost in the private sector during the month of September. Analysts had expected them to show that 18,000 new jobs had been added. ADP has undershot the government’s number three straight months and traders are choosing to ignore it.

The teaching losses at the local level are a travesty. The country with the brightest, hardest working people will prosper and the US is heading in the wrong direction. State and local governments are running massive deficits and this could be the next crisis for our country. They also have structural debt problems caused by entitlement programs (pensions). I’ve heard estimates that up to 2 million people could be laid off by state and local governments in the next two years.

Our country is faced with enormous problems in the future, but that is not impacting the market today. The focus is on earnings season, November elections, growth in China, quantitative easing, attractive stock valuations and a year-end rally. As long as there is a sliver of job growth in the private sector, the market is content.

Personally, I feel this splash of cold water should serve as a wake-up call. This was not a good number and after a big run-up, the market is due for a pullback. If we close below SPY 115, many traders that bought the breakout (myself included) would be flushed out. As I’ve been saying the last few days, if the market can hold SPY 115 today, it will challenge the highs of the year by the end of the month.

Asset Managers still need to place money and they have not gotten the pullback they were waiting for. Today’s number represented their last chance for a pullback and the number was not disastrous enough to spark a major decline. They will aggressively buy stocks ahead of earnings next week.

The earnings and economic releases are light next week and that favors the bulls. The momentum is clearly to the upside and there is nothing to keep a lid on the market.

If by chance the market closes below SPY 115, exit long positions and wait for support. Otherwise, hold on to your calls and manage profits. As the market approaches SPY 122, start scaling out of your positions. I believe the market will be choppy today and it will close right around SPY 116. The news was not bad enough to spark a selloff and it is not good enough to justify a rally. 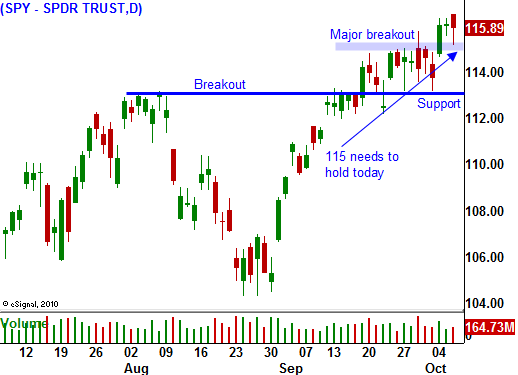