Earnings Should Push The Market Higher This Week!

Last week, the market continued to push higher and the Dow closed above 11,000 for the first time in five months. As long as the economic news is not horrible, buyers are adding to their positions.

The biggest release each month is the Unemployment Report. Analysts were expecting flat job growth and 95,000 jobs were lost in September. Normally, a miss of that magnitude would spark a selloff. Traders took comfort in the 64,000 private sector jobs that were added and stocks nudged higher. Earlier last week, initial jobless claims improved for the fourth straight week and that could also be calming nerves.

This week, the FOMC minutes, initial claims, PPI, trade balance, CPI, retail sales, Empire Manufacturing, consumer sentiment and business inventories will be released. Traders will be looking for a timeframe on the next round of quantitative easing (QE). That event is already priced into the market. Initial claims have been improving and inflation has been benign. Retailers posted mixed results last week that were better than expected and retails sales should be decent. I’m not expecting any big fireworks from these numbers.

Earnings season kicked off last week when Alcoa posted results. The market liked the revenue growth and the guidance. Perhaps the biggest market moving event this week will come after tomorrow’s close. Intel will announce earnings after the close. Last quarter, they had the biggest profit in 40 years. They had to lower the guidance for this quarter and the stock is trading at the low end of its range. Semiconductors have been lagging the market and I feel that they have plenty of upside. This could be the next catalyst for this rally.

J.P. Morgan Chase is one of the strongest banks and they will release before the open Wednesday. Financial stocks have also lagged the market and there is room for an upside surprise. Trading volumes have been down and investment banking has been quiet. Increased regulation will reduce profits and the sector has been lame.

Overall, the earnings should be good this week. The companies are strong and they have upside room. The main releases don’t start for another week so things could be fairly quiet. That favors the bulls since the upward momentum can continue unimpeded.

The SPY was able to close above $115 last week. That was a major breakdown and Asset Managers who are “under allocated in equities” will be scrambling to buy stocks. They don’t want to miss a year-end rally and they know that earnings season and November elections are positive influences. The pullback they were waiting for never came and now they have to chase stocks.

I still believe that the market will make a run at the highs of the year in the next few weeks. As that move unfolds, I will be scaling out of long positions. All of the good news will be “baked in” and once the elections are over, traders will realize that nothing has changed. There is also a chance that Republicans might not fare as well as expected. Earnings season will be well underway and comps will be tougher to beat. I believe we could see a decent pullback after the November elections and I plan to be out of my long positions ahead of time.

For now, let your profits run. I don’t see anything standing in the way of this rally throughout this week. Prices should grind higher today and you could see a small buying spurt near the close. You might want to buy some semiconductor stocks ahead of Intel’s earnings tomorrow. 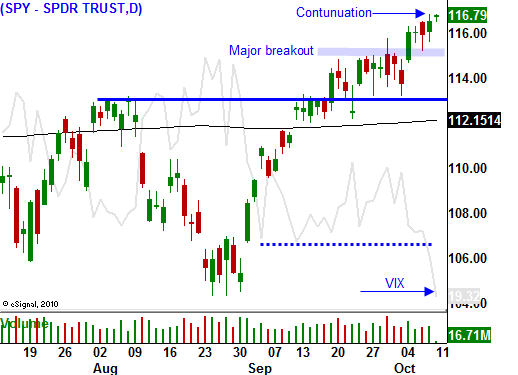