Even after a dismal Unemployment Report last week, the market was able to rally. The Dow closed above 11,000 for the first time in five months and stocks have been able to hold the breakout above SPY 115.

As long as economic news is not horrible, buyers are embracing attractive stock valuations. Ten-year US Treasury bond yields are lower than many dividend yields and investors would rather place their money into equities where they can generate income and they have the potential for capital appreciation. This asset rotation will continue as long as growth in China is sustained and credit concerns in Europe are contained.

Overnight, China raised its bank reserve requirements. That is the fourth increase this year. Stocks in China rallied, but markets in the rest of Asia declined. Japan, Korea and Australia are dependent on growth in China. Unlike most analysts, I see this action as a positive sign. China’s growth is so strong that they can tighten money supply. In the US, we are doing exactly the opposite.

This afternoon, the FOMC minutes will be released. Traders will be looking for signs of quantitative easing and they want to know the magnitude and the time frame. In a recent survey, most traders believe that the Fed will inject $500 billion into the banking system. Our economy is so weak that we have to resort to printing money. For every $1 trillion the Fed adds to the system, our GDP grows .5%. The “bang for our buck” is miniscule and we continue to drift further into debt.

As we buy our own debt, we also have interest rate risk. When it comes time to unwind the position (sell the bonds), the Fed’s balance sheet will take a hit. Higher interest rates would decrease the value of our bonds and we would be selling them at a loss. The theory is that these losses would be offset by higher tax revenues as the economy rebounds.

We are walking a tight rope and currency devaluation has unintended consequences. The US has a huge trade imbalance and as the dollar declines, it costs us more to import goods. That means inflation will start creeping into our economy.

The Fed is not providing a solution; it is merely applying a Band-Aid to the problem so that politicians can kick the can down the road. Structural problems like Social Security and Medicare are bankrupting our country at an alarming rate and not a single Republican or Democrat running for office in November dares to touch that political poison. If they do, they won’t get elected.

These same problems exist in Europe and I believe we are less than two years away from a global credit crisis. For now, these concerns have subsided. Greece held a six month bond auction yesterday and the results were excellent. The bid to cover was greater than four and interest rates actually declined slightly.

As I mentioned earlier, as long as growth in China continues and credit concerns in Europe are contained, the market will rally. Asset Managers don’t want to miss the year- rally and they want to buy stocks ahead of the November elections and earnings season. I believe the market will rally up to the highs of the year in the next two weeks, but we are in the final inning of this rally.

The market has rebounded 12 1/2% since September and all of the good news is “priced in”. Typically, the price action is bullish during the first two weeks of earnings season because the strongest companies announce early. Year-over-year comparisons will be tougher to beat because the economic recovery was underway a year ago. The November elections might not overwhelmingly favor Republicans. Both situations have more potential downside than upside. For this reason, I will be selling my long call positions into this rally. I plan to be flat by the time November elections are held.

The market wants to see evidence of QE2 in the FOMC minutes this afternoon. The expectations might be a little ahead of the Fed and that could result in a late day decline – there is room for disappointment.

After the close, Intel will release earnings. This could be the spark semiconductor stocks have been looking for. Last month, the company posted the biggest profits in 40 years. They had to reduce guidance slightly and the stock got pounded. It is trading near the low end of the range and there is room for an upside reaction to the number.

Before the open, J.P. Morgan Chase releases earnings. Analysts are expecting bank profits to be down and these stocks have room for an upside surprise. Chase is one of the strongest banks and I am expecting decent results and a good reaction.

The economic news the rest of the week is rather light and I do not believe it will stand in the way of this rally. The earnings should have a positive bias. If the Fed minutes reveal an inclination for QE2, the market won’t run higher (because that is expected), but it won’t sell off. That will pave the way for earnings to propel stocks higher for the remainder of the week.
As long as the SPY is above 115, stay long. If that support fails, lighten up quickly. 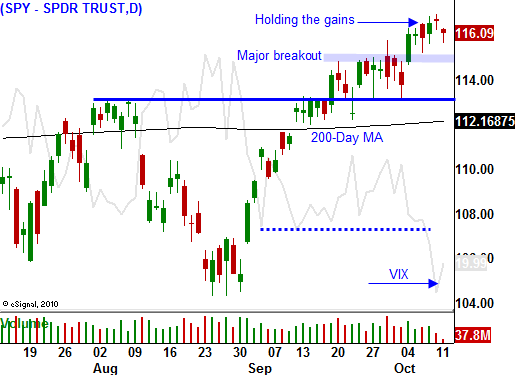