Ride the Momentum. Start Taking Profits As the SPY Crosses 120!

Yesterday, the FOMC minutes revealed exactly what the market wanted to hear. Fed officials believe that another round of quantitative easing will be needed soon. Most analysts feel that $500 billion will be injected into the banking system.

After the close, Intel reported better-than-expected earnings. The market reaction was positive and the company said that it sees broad based growth across all computing segments. Semiconductors have lagged during this rally and this could be the catalyst to push stock prices higher. CSX also posted better than expected earnings and the guidance was positive. Railroad stocks are all making new 52-week highs today.

Before the open, J.P. Morgan Chase posted better than expected results. This is one of the strongest banks and I expected a positive report. The stock is trading down a little after the news, but financial stocks are not weighing down this rally.

Stocks have broken out to a new relative high and the upward momentum is strong. As I mentioned yesterday, we needed to get past the FOMC minutes and once that was behind us, stocks had an unimpeded path higher. The economic news is relatively light this week and as the market pushes upward, option expiration buy programs could “goose” prices even more.

Tomorrow, Google will release earnings after the close. The stock is in the middle of its 2010 range and it could swing either way. I like the breakout above $510 and the trend from the September lows is strong. From a technical standpoint, it looks poised to move higher.

I believe the market will challenge the highs of the year in the next two weeks. November elections and the beginning of earnings season will provide the impetus. Asset Managers are scrambling to buy stocks and they do not want to miss a year-end rally.

As the market approaches SPY 122, I will start taking profits. All of the good news will be “baked in” and I want to see if the market has enough strength to punch through resistance. I can always get back in if it does, but I suspect we will have a pullback. If I’m on the sidelines, I can clearly evaluate the action.

Economic conditions are flat and unemployment is declining. Credit concerns in Europe can flare up at any time and there is a chance that Republicans won’t fare as well as expected. Stocks have had a tendency to decline after the first few weeks of earnings and year-over-year comparisons will be more difficult to beat. These potential spoilers loom and it is wise to take profits after a 15% rally in 2 months.

I’m not looking for a major decline this year. In fact, any pullback to SPY 115 will probably be a buying opportunity.

For now, stay long and enjoy the ride. Start taking profits as the SPY crosses over 120.

I am hosting a Live Webinar Tonight. It will include extensive market commentary, 2 new option trades and a review of recent trades in each of my research reports. The price has been reduced 50%. Sign -up now. 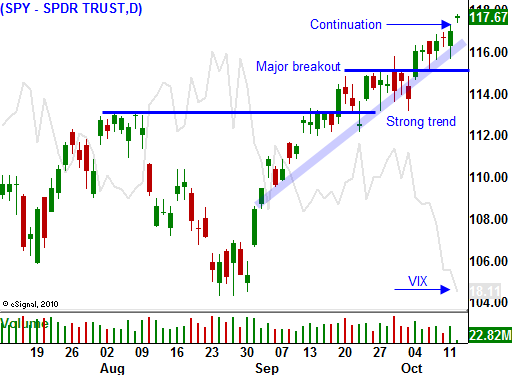