Tuesday afternoon, the FOMC minutes revealed that Fed officials are leaning towards immediate quantitative easing. That was music to the market’s ears and stocks moved higher. That action could come as soon as November.

After the close Tuesday, Intel released better-than-expected earnings. They cited strength across all computing sectors and the guidance was good. That set up an underlying bid to the market yesterday and stock’s shot higher on the open. Solid earnings from CSX and J.P. Morgan Chase also helped.

This morning, the PPI rose .4%. That is much higher than expected and is the second consecutive month that wholesale prices have moved higher. These costs will either get passed on to consumers and the CPI will increase or corporations will absorb the higher costs and profit margins will fall. Neither scenario is good for the market long-term.

The Fed does not mind a little inflation. They are more concerned with disinflation. That is a condition that Japan has been battling for years and it is hard to reverse. The Fed wants to make sure that it is doing everything possible to keep this recovery alive.

I sense that the market is getting a little tired. Even after a round of outstanding news, stocks backed off from their highs yesterday. This morning, a slightly worse than expected initial jobless claims number was released. In previous weeks, this has not affected the market. The S&P 500 futures are down 6 points and traders don’t want to chase stocks ahead of major earnings announcements next week.

The market has rebounded 14% in a matter of weeks and it is overbought. The recent breakout above horizontal resistance at SPY 115 should hold and it represents a significant support level. As long as we stay above it, stocks should be able to challenge the highs of the year in the next two weeks. The beginning of earnings season tends to be bullish and November elections are only a few weeks away.

Tomorrow, CPI will be released. As long as inflation does not spread to consumers, the market won’t fret. Retail sales will also be released and department stores posted decent revenue gains for the month of September. I am expecting this number to be “market friendly”. Empire Manufacturing has been weak, but the market has ignored the number in recent months. Consumer sentiment will also be posted and even though it has been dismal, the market expected the news. These numbers should not produce a major negative reaction Friday.

The economic releases next week are fairly light as well and the focus will be on earnings. By the end of the week, we will get a good feel for Q3 performance. Major financial institutions will be posting results. The sector has been weak relative to the market and the downside should be contained. I am not looking for a rally in financial stocks. There are too many issues (regulations, low trading volumes, foreclosure moratorium and light investment banking activity) that need to be resolved. Tech and energy are likely to fuel the next leg higher.

As the market pushes towards the highs of the year, I will be taking profits on call positions. I believe that all of the good news is “baked in” and this rally is getting tired. If I am in cash, I can evaluate the price action clearly. This has been a good run and I don’t want to get greedy.

There are too many potential spoilers. Republicans might not win by a landslide, year-over-year earnings comps will be tougher to beat and Euro credit concerns can flare up at any time.

As long as the SPY stays above 115, maintain your bullish positions. As we moved higher, take profits. 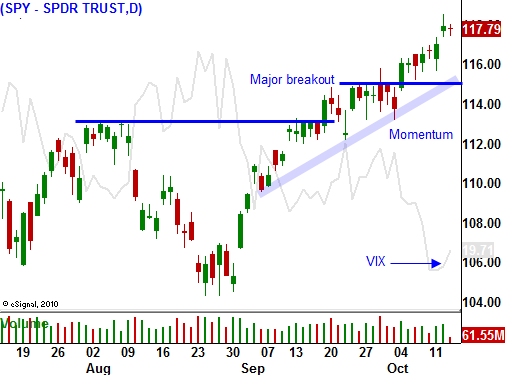