Stay Long But Don’t Add. Next Week Sell Into Strength!

The market started to feel a little heavy yesterday. Initial jobless claims came in slightly worse than expected, but that has not recently weighed stocks down. I sensed selling pressure on Wednesday when the market was not able to hold gains after excellent news.

Tuesday’s FOMC minutes revealed that the Fed is prepared to launch another round of quantitative easing soon (QE2). This was priced into the market, but traders needed concrete evidence. Stocks pushed higher into the close that day and they got another dose of good news after the bell.

Intel beat earnings estimates and they cited widespread growth across all computing segments. This propelled tech stocks and the market made a new relative high. Late in the day, the market backed off from its highs and this was unexpected given the surrounding news.

This morning, the overnight events have been very positive, yet the market is testing the downside. Google beat earnings estimates and the stock rallied $50. Tech stocks are in positive territory this morning and they need to lead the next leg of this rally. If they can’t, the market won’t challenge the highs of the year. GE beat consensus estimates, but the stock is trading lower. Revenues were $35.9 billion and analysts were expecting $37.4 billion. That “miss” has traders worried about the global economic recovery because heavy equipment sales were partially to blame.

The economic news was decent this morning. Retail sales rose .4% with strong purchases of big-ticket items. The CPI only rose .1% and consumers are not impacted by inflation (according to the numbers). Empire manufacturing was also much better than expected.

The weak price action signals overhead resistance. Stocks have run up 14% in a matter of weeks and it would be normal to see some profit-taking near the upper end of the range. Traders don’t want to chase stocks ahead of a big earnings week. If the results are good, they can justify getting long.

The economic news next week is fairly light and the focus will be earnings. The financial sector has been relatively weak and I expect that to continue. The results will be better than expected, but major obstacles lie ahead. The strength will have to come from tech and energy. These companies have the potential to raise guidance and they should lead the final leg of this rally.

I have started taking some profits on my long positions and if I continue to see the market decline after good news, I will lighten up quickly. As long as we stay above SPY 115, I don’t mind hanging on to my calls.

Within the next couple of weeks, all of the good news will be priced in. By the time November elections roll around I plan to be in cash. There are too many things that could spoil this rally as the highs of the year are being tested. Republicans might not fare as well as expected, year-over-year earnings comparisons will be tougher to beat, credit concerns in Europe could flare up and traders might realize that our economy is on life support (QE2).

It feels like the seasonal patterns were moved forward this year. The decline we would normally see in September happened in August. The year-end rally that would normally start in October began in September. By being in cash I can lock in profits and objectively evaluate the price action heading into year-end.

For now, stay long and take profits as the market rallies. I am expecting a rebound later today because the news was pretty decent this morning.

If by chance support at SPY 115 is broken next week, exit bullish positions – I would not get short. As long as China’s economy continues to grow and credit concerns in Europe are low, any dip will be a buying opportunity. When support is broken, we need to wait for buyers to come back in and then we can reestablish bullish positions.

Stocks are attractively valued and money will shift from bonds to equities. Seagate Technology is a classic example and today they announced plans to go private. They have the cash to buy back much of their stock which is undervalued. 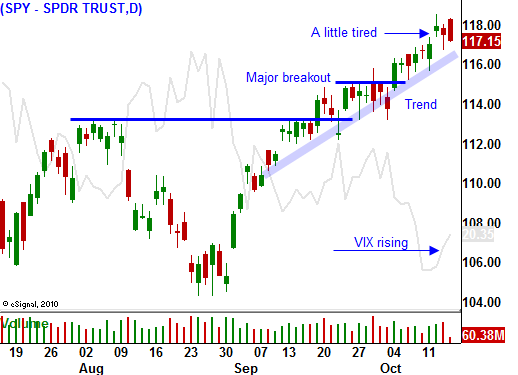