Last week, the market was able to hold key support at SPY 115 and it inched its way higher. Solid earnings from Intel, J.P. Morgan Chase and Google helped to propel it.

The economic news this week is rather light. Industrial production, housing starts, the Beige Book, initial claims, LEI and the Philly Fed will be released. These have not been market moving events and the focus will clearly be on earnings.

This morning, Citigroup posted better than expected results. The stock is up 1% and it has given the market a positive tone. Financial stocks are trading near the low end of their range. They have the potential to surprise on the upside, but looming issues like the financial reform bill, high unemployment and the mortgage moratorium will keep a lid on these stocks. Profits will be down due to low trading volumes and a lull in investment banking. This afternoon, Zion’s will release and before tomorrow’s open, Bank of America and Goldman Sachs will post results.

If this market is going to challenge the highs of the year, tech stocks need to lead the rally. Last week, the QQQQ was up 4%. After the close, Apple, IBM and VMWare will announce earnings. I am expecting good results, but I don’t know if the stocks still have room to run. All three are in strong up trends and investors might be tempted to take profits. The market’s reaction will be very telling. If we run higher, the SPY will challenge the highs of the year. If we pull back, the market will be ready to test support at SPY 115.

In today’s chart you can see that the VIX has started to climb. This is unusual when the market is in an uptrend. It tells me that investors are nervous and they are buying puts for protection. Speculators might also be taking short positions. Option implied volatilities are still low and this is not a major concern. It could simply be a warning sign.

As long as the SPY is above 115, I will stay long. I have started taking profits and I plan to be out of all of my calls in the next two weeks. When November elections roll around, I will be flat. The market could rally on Republican victories, but I believe that news is already priced in. The strongest companies announce early in the earnings cycle and stocks have tended to trade lower after the first few weeks of the season. Year-over-year comparisons will be tougher to beat since the economic recovery was well under way a year ago. Economic numbers have not been encouraging and they are not a pillar of strength. Quantitative easing is also priced into this market. Traders realize that it will be minimally effective and it will push our country further into debt. If our problems could have been solved by printing money, why didn’t we do it earlier? More importantly, why should any of us work? Let’s just print money!

I was looking for a decline in September and I was wrong. The market skyrocketed and I had to sell my short positions at a loss. Fortunately, I recognized that a major reversal was under way and I was able to get long. I have more than covered my losses and I want to lock-in my profits. I’ve learned over the last 20 years that when the market gives you a second chance – take it. Stocks have run up 14% in a matter of weeks, don’t be greedy.

I don’t believe we will see a major meltdown this year. China’s growth is intact and credit concerns in Europe have subsided. Stock valuations are attractive and I believe any substantial pullback will represent a buying opportunity. Start taking profits and scale out of bullish positions. Once support has been established, you can get back in at better prices.

The market wants to inch higher today. I expect to see strength into the closing bell. The overnight reaction to the earnings will be very telling and we will know if it is time to exit bullish positions aggressively or if we can milk some more profits out of our longs for another two weeks. 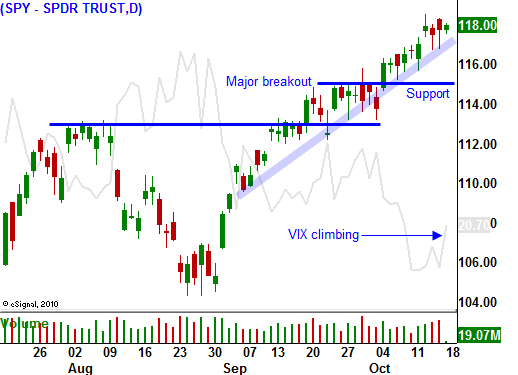