Tech Stocks Are Fully Priced. This Rally Will Stall Soon.

Last week, the market inched its way higher and it was able to add to gains after breaking through major resistance at SPY 115. Stocks have a tendency to rally ahead of earnings and that momentum lasts into the first few weeks of the season. The strongest companies tend to announce early in the cycle and optimism pushes stocks higher.

Eventually, all of the good news gets “baked in” and the market struggles to advance even though companies beat consensus estimates. Last night and this morning, major earnings announcements were released. In almost every case, profits were better than expected and the stocks are down. This tells me that the market is getting tired and a pullback is just around the corner.

This week we will hear from many financial companies. Goldman Sachs announced earnings this morning and they beat by a healthy margin. The stock is barely up after the news. This sector is still plagued by increased regulation, high unemployment, low trading volumes and a low level of investment banking. These stocks are trading near the low end of their range and they won’t rebound until some of these issues are resolved.

The economic news is light this week and there aren’t any market moving releases. The biggest news came overnight when China raised its interest rates by .25%. This action will strengthen their currency and it might calm nerves in Washington DC. We were on the brink of labeling them currency manipulators and that would have created a great deal of tension with our largest bondholder.

China is about to release Q3 GDP and some analysts believe that it will be very strong. They are trying to get ahead of the curve and that is why they raised rates now. This rate hike is good news from my perspective. It tells me that their economic growth can support higher interest rates. Asian stocks traded higher after the news.

Our situation is dire. We are trying to resuscitate our economy. It can’t withstand higher interest rates so we have opted to artificially suppress them. Quantitative easing will devalue the dollar as we print money. A $300,000 house might someday be worth $500,000, but that money won’t buy much. If you print enough of it, you can pay off your debts with “funny money”. This is the Latin American approach to the solution and it won’t take traders long to realize that QE2 is a bad thing.

Structural problems need to be addressed in our country. Social Security, Medicare, Medicaid and interest on our national debt consume almost all of our revenue. That’s right, almost all of it! These programs are political toxin and not one candidate dares to address them. If they do, they won’t get elected. We can cut all of the wasteful spending we want and it won’t dent the financial drain caused by entitlement programs.

But why worry about the future? Our politicians will kick the can down the road until they hit a dead end. Americans don’t want face pain, they want to live for today. This short term mentality has spread to every industry. I care about our nation’s future, but I’m driven by my short term decisions. Buy and hold is dead, so let’s figure out how to make some money today.

China’s growth is strong and credit concerns in Europe have subsided. Bond yields are extremely low and stocks are attractively valued. A weak dollar is inflationary and we need to focus on companies that have pricing power. They have the ability to pass higher costs on to their customers. Companies that do a lot of business overseas will also benefit. They will earn money in currencies that are strong relative to the dollar.

The market is tired and after a 14% rally in a matter of weeks, it is due for a pullback. I do not believe that we will see a meltdown. Support at SPY 115 will likely be tested and that decline will represent a buying opportunity. I like commodity stocks and heavy equipment manufacturers that do business in China, Brazil and India.

I am taking profits on my call positions and today’s price action tells me that we can’t count on tech to lead us higher. I am selling call spreads on tech stocks that have rocketed and I will wait for a pullback. I believe that decline will come after the November elections. Once support is established, I will sell out of the money put spreads in the groups I mentioned above.

The market is likely to pullback today. Take profits on call positions. 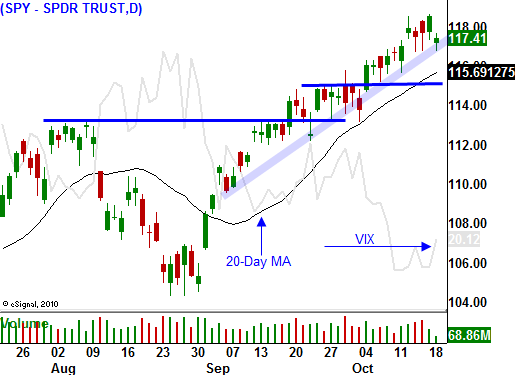