The Bid Is Still Strong As Buyers Snap Up Shares. Take Profits and Sell Into Strength!

Yesterday, tech stocks like Apple, IBM and VMware posted better than expected earnings and in each case the stocks traded lower after the number. All of the good news was already priced in and shares moved higher before the announcements. This sector has the greatest potential to lead the market higher and if it stalls, we won’t see new highs for the year.

During the first two weeks of earnings season, the strongest companies release results. The QQQQ rallied 4% last week and it might have gotten a little ahead of itself. As the day wore on, stocks continued to drift lower.

Investors were spooked by news that Bank of America might have to make good on mortgage losses that they packaged and resold. Analysts estimate that these write-downs could exceed $40 billion. BAC bought Countrywide Financial and they have the greatest risk exposure. In total, banks could be looking at losses in excess of $100 billion. When you consider regulatory reform, high employment, the mortgage moratorium, low trading volumes and a quiet IPO environment, this sector has too much “baggage”. Financial stocks are not likely to rally.

Energy stocks could fuel the rally. A weak dollar has boosted the price of oil. Unfortunately, inventories are relatively high and demand needs to strengthen if prices are going to increase.

Healthcare stocks have been posting solid numbers. However, the price action has been lame (ABT, UNH, ISRG, JNJ, SYK, STJ). These companies are caught between a rock and a hard place. The more money they make, the louder the cries for healthcare reform. This sector is also “dead wood”.

Commodity stocks and heavy equipment look attractive. Emerging markets are consuming basic materials and a weak dollar is pushing prices higher. Producers have pricing power and these companies should post excellent profits. Heavy equipment manufacturers that sell internationally have reported excellent revenue growth and they are paid in foreign currencies that are strong relative to the dollar. These stocks have performed well and they continue to make new highs.

Yesterday’s dip was very brief. As you can see in the chart below, the declines have been contained to a single day and the snap back has been immediate. The trend has been preserved and buyers are still anxious to get in ahead of the November elections. A second down day in the next week would be a warning sign that a short-term top is near.

Initially, the market did not like the surprise move by China yesterday. They raised interest rates by .25%. As I mentioned, I saw this as a sign of strength. They are confident in their economic growth and they feel that their activity can support a rate hike. When they release Q3 GDP, we can expect a solid number. Growth in China is essential if our market is going to move higher. The entire world is hoping that they can pull us out of this recession.

On the other hand, quantitative easing is an act of desperation. We are grasping at straws to get our economy back on its feet. If printing money is the solution, we should all stop working so that we can man the presses. For every $1 trillion of QE2, our GDP will grow .25%. It won’t stimulate our economy and it will only drive us further into debt. It also increases our interest rate risk. When we eventually have to sell the bonds that we bought, the price will be lower (because interest rates will be higher) and we will incur a huge loss. In theory, the economy will be improving and the losses will be offset by higher tax revenues. That only works if the growth is real and not due to inflation. Stagflation would be lethal scenario.

Apparently, the Fed can’t let this recession take its own course. We need to stomp on the accelerator to get from point A to point B as fast as possible and then we need to slam on the brakes before we hit a brick wall. This action makes no sense to me and expectations are for a $500 billion injection by the Fed in November. Anything less (I believe they will start with $200 billion) will spark a market selloff.

In a poll this morning, Democrats are running neck-and-neck with Republicans. They have taken the issues and made them local whereas Republicans want to compete on a national basis. This has enabled them to move up in the polls. The market has priced in a Republican landslide and I sense that is too optimistic.

I believe the headwinds will blow as we approach the highs of the year. I am taking profits on my long positions and I will be out this week. I did not like the tech price action after good earnings yesterday and the sectors that could spark a rally are stalling. A nice, swift pullback will set up a better buying opportunity and I plan to watch from the sidelines.

I like the gradual climb higher today and I expect it to continue. Watch out for the Beige Book at 2:00 ET. I’m not expecting any surprises, but you never know. Stable economic conditions (no growth or decline) will suffice to keep this rally going. The economic releases are light this week and momentum will push prices higher.

Those of you looking for an opportunity to sell out of the money call credit spreads, wait for another big down day. If it comes in the next week, it will signal resistance. 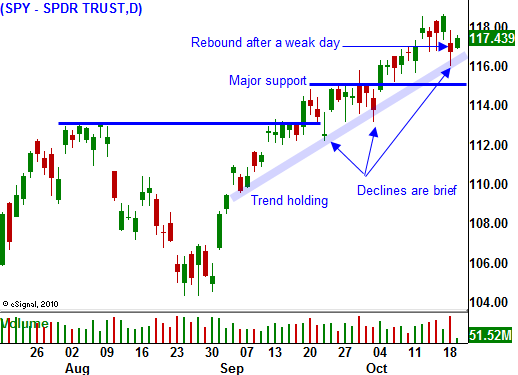