The Early Rally Has Backed-off. Continue to Scale out of Long Positions.

Yesterday, stocks staged an impressive rally and they erased Tuesday’s losses. The market continues to inch its way closer to the highs of the year.

The economic news today was benign. Initial jobless claims came in at 452,000, LEI rose .3% and the Philly Fed was 1.0. These numbers had little impact on the market.

Next week, consumer confidence, durable goods orders, initial claims, GDP, Chicago PMI and consumer sentiment will be released. These events have not been market movers in the past and they will not stand in the way of this rally.

I’ve been selling my long positions and I plan to be flat by this time next week. Stocks that have posted excellent earnings are not moving higher. Caterpillar was a classic example today. This tells me that the market is getting tired as it approaches major resistance.

China said its economy grew 9.6% last quarter. The expectations for a huge number surfaced earlier in the week when they raised interest rates .25%. This is a strong number, but it is slightly below estimates. In order for our market to push higher, China’s growth must remain intact. This piece of the puzzle is firmly in place.

In two weeks the November elections and the FOMC meeting will drive the action. Analysts are expecting a landslide victory for Republicans and a poll yesterday revealed that the races are very even. Traders are expecting the Fed to inject $500 billion into our banking system when they meet. The next round of quantitative easing can create unintended consequences and I believe they will gradually take action. In both cases, there is room for disappointment.

The market has a history of rallying ahead of earnings season and that momentum lasts into the first few weeks of the cycle. The strongest companies announce early and great expectations get priced in. By the third week, companies beat earnings estimates and the stocks decline after a number. We are getting close to that point.

After a 13% rally in six weeks, it would be foolish not to take profits. The market is approaching a major resistance level and I want to calmly watch from the sidelines. Option implied volatilities have fallen to levels not seen since April. Confidence is high and the likelihood of a swift decline increases every day. I am not looking for a major meltdown. Stocks could easily test support at SPY 112 and stage a year-end rally from that level. Once support is established, a buying opportunity will present itself.

Today’s rally backed off considerably and I would not be surprised to see a round of profit-taking late this afternoon. Keep selling into strength. You should not have more than one third of your longs on after tomorrow. I have most of my money off of the table and I am sleeping well. The remainder of my position will be easy to manage. 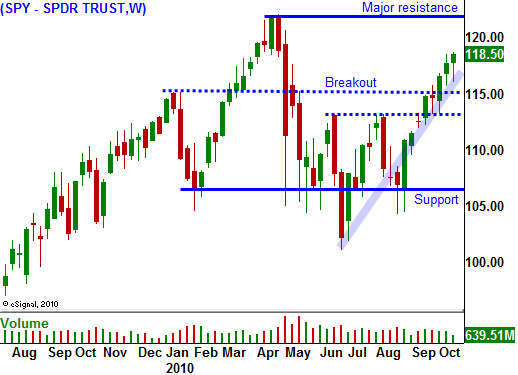