Profit Taking Will Provide A Stiff Headwind. The Momentum Is Fading!

Yesterday, the market opened higher after a decent round of economic news and strong earnings announcements. The SPY reached 119 early in the day, but profit-taking set in. Stocks reversed direction and spent the afternoon in negative territory before rallying back to ground zero just before the close.

This type of price action tells me that the momentum is starting to fade. We’ve had a great run from the September lows and traders sense that all of the good news is “baked in”. The expectations for a Republican landslide and a substantial monetary injection by the Fed are lofty and that leaves room for disappointment. I expect to see profit-taking near these levels.

Overnight, the earnings have been good and the market is poised for a higher open. As I have been saying for the last week, start scaling out of bullish positions and sell into strength.

Asset Managers hate chasing stocks and they don’t like to buy them at the top of a range after a huge run-up. The fear of missing a year-end rally will be suppressed by upcoming events. They will patiently sit on the sidelines until the elections are over.

China just released Q3 GDP and their economy grew 9.6% last quarter. This critical piece of the puzzle is firmly in place. Credit concerns have temporarily subsided. These two conditions have potential to destroy this rally if they change. I am closely monitoring them and I will be ready to adjust my positions.

For now, stocks are attractively valued relative to bonds. Corporations have slashed expenses and any revenue growth goes right to the bottom line. Earnings have been strong, but the expectations are high. Many stocks have not been able to rally even after beating estimates.

By the end of next week, I will be out of all of my positions. There are times when cash is king and this is one of them. I sense a pullback, but it might not be a big one. Consequently, I don’t want to take a bearish stance. If I load up on short positions, I risk getting caught in a snap back rally. I will spend most of my time controlling the damage instead of looking for buying opportunities. It makes much more sense for me to sit back and scale into long positions when support is established.

We will rally early today and the market will give back some of those gains later in the day. Yesterday’s price action tells me that traders are taking some chips off the table. I suggest you do the same. 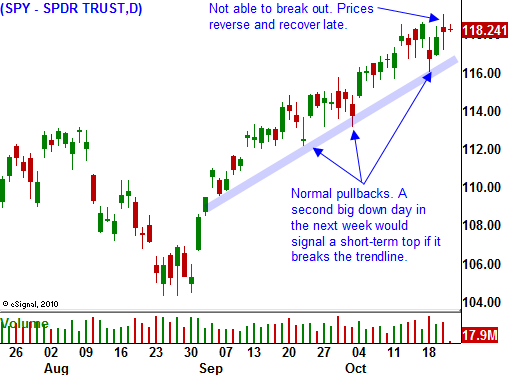