Elections and FOMC Next Week. Take Profits and Head To the Sidelines.

Last week, the market digested a heavy round of earnings. More than a quarter of the companies in the S&P 500 have posted results and 83% of them exceeded estimates. The market held its ground, but it did not advance.

This morning, the S&P 500 is up 10 points. There hasn’t been any major news to justify this move. Overseas markets were strong and that buying spilled over to our market. Stocks continue to move higher and the SPY is one good day away from challenging the highs of the year.

Major earnings releases this week will drive the action. It is typical for stocks to rally before earnings season and that momentum lasts during the first few weeks of the cycle. We are getting to the point where good news is priced in.

The economic news this week is not likely to spoil this rally. Consumer confidence, durable goods orders, new home sales, initial claims, GDP, Chicago PMI and consumer sentiment will be released. These are not typically “market movers”.

With each passing day we will draw closer to next Tuesday’s elections. Republican victories would be “market friendly”, but that news is already baked in. That means that there is room for disappointment. Some “Tea Party” candidates are so radical that they could actually hurt the Republican ticket.

Next Wednesday, the FOMC will release its statement. In a recent poll, more than half of the analysts believe they will inject $500 billion into the banking system. I believe that quantitative easing is dangerous and the Fed will ease in. This will give them greater flexibility in the future and they will be able to gauge the effect. The market is counting on substantial action next week and again, there is room for disappointment.

Momentum could push the market to the highs of the year this week. That resistance level will hold as traders take profits. After a 14% rally in two months, it would be foolish not to lock in gains. Asset Managers will not chase stocks ahead of major developments.

I am exiting my remaining long positions this week. From the sidelines I can clearly evaluate the action. On a substantial pullback, I will watch for support and I will “buy the dip”.

For today, I expect the early rally to fade. There isn’t any news to justify this move and I believe investors are anxious to take some money off of the table. As for the rest of the week, look for a sluggish rally with small gains each day. 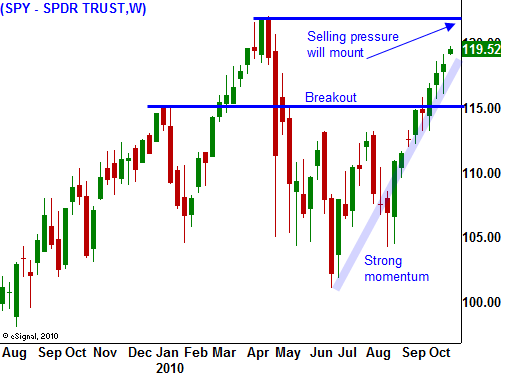