The market is going to hit stiff headwinds. We are approaching the highs of the year and all of the good news is baked in.

Republican victories next week are expected and the chance for disappointment is greater than the chance of a landslide. Tea Party radicals might be tainting the GOP ticket.

The FOMC will disclose QE2. Consensus estimates are for an injection of $500 billion. I believe they are treading on thin ice and they will gradually add money. That means there is room for disappointment when they release their statement next Wednesday.

The strongest companies have released earnings and the good news is priced in. Even after posting excellent results, many stocks are down after the announcement. One third of the S&P has posted results and 83% of the companies have exceeded estimates.

I believe we will see a market pullback, but nothing too drastic. Some of the bullish speculators will be flushed out and the market will find support. Asset Managers still want to rotate out of fixed income and into equities.

China’s economy grew at 9.6% last quarter. This is a critical piece of the puzzle. As long as this expansion continues, stocks will move higher. The entire world still expects China to pull us out of this recession.

Credit concerns in Europe have subsided. Austerity programs have been initiated and bond auctions have gone well. This problem will fester in coming months, but it will not resurface until 2011. Structural reform is needed and budget cuts are nothing more than a Band-aid.

The economic news this week includes durable goods, initial claims, and GDP. These have not been “market movers” and they should not spoil the rally.

After a 14% run in a matter of months, the market is due for a pullback. Profit taking is likely to set in next week and the SPY could pullback to 115. I expect that level to hold. Worst case, it will test the 200-day MA at 112.

I am almost out of my bullish positions and I will watch the news events unfold from the sidelines next week. Look for a pullback late in the day. The price action is getting heavy. Exit long positions and lock in profits. 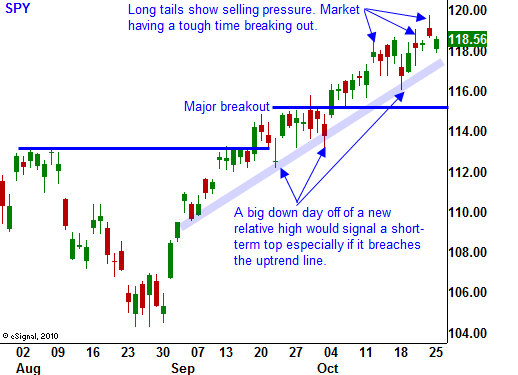