Next Wednesday Will Be the Most Exciting Trading Day of the Year!

Next week is shaping up to be the “grand daddy of news weeks”. Major political and economic events will influence the market. The next two days are the calm before the storm.

This morning, Q3 GDP came in as expected at 2%. The market rallied a little off of the number. Consumer sentiment fell to 67.7, the lowest level in a year. This was just below estimates and it did not weigh on stocks. These two releases would normally have a bigger impact, but traders are much more concerned with what lies ahead.

The big monthly economic releases (ISM manufacturing, ADP employment, ISM services, initial claims and the Unemployment Report) would normally be plenty for the market to digest. This time around, there are two other major developments.

On Wednesday, election results will be known. If Republicans win back the House and come close to regaining the Senate, stocks will rally. If Democrats make a late run and maintain their control, the market will pull back.

The FOMC will release its statement Wednesday afternoon. We will know the extent of quantitative easing and I believe it will be less than the market expects.

In the end, the dust will settle and traders will realize that nothing has really changed. Political gridlock might seem positive initially, but our economy has stalled and our deficits are spiraling out of control. Republicans are not the solution, but they will slow the bleeding. Entitlement programs are the problem and immediate structural reform is needed. Unfortunately, this is political toxin and no one will touch it with a 10-foot pole.

As for quantitative easing, traders will look forward to the next injection. They will take comfort knowing that the Fed is ready to take action. Many will also realize that this is nothing more than a “warm fuzzy”. They can increase the money supply, but they can’t increase the velocity – banks aren’t lending. On a macro level, it doesn’t take a rocket scientist to figure out that the entire act of printing money is an act of desperation.

The initial knee-jerk reaction will be fun to watch and I plan to do it from the sidelines. When the dust settles, the market will deal with the new political scene and the Fed’s action. The focus will return to earnings and interest rates.

Stocks are attractively valued relative to bonds and money will rotate from fixed income into equities. Yesterday, TrimTabs reported money flowed into equities (mutual funds) for the first time in months. Portfolio Managers have been waiting for a dip and they will aggressively bid for stocks if we get one.

The best case scenario would be a sharp, dramatic pullback to support at SPY 113. Once support is established, I would be ready by calls. I believe we will have a year-end rally that challenges resistance at SPY 122.

The worst-case scenario would be a huge rally that instantly runs up to the highs of the year. I do not want to chase stocks and I would be a reluctant participant. I might get long, but my exposure would be very limited. I don’t want to have the rug pulled out from under me.

I suggest going to cash and taking a few days off. The action will be fast and furious next Wednesday. 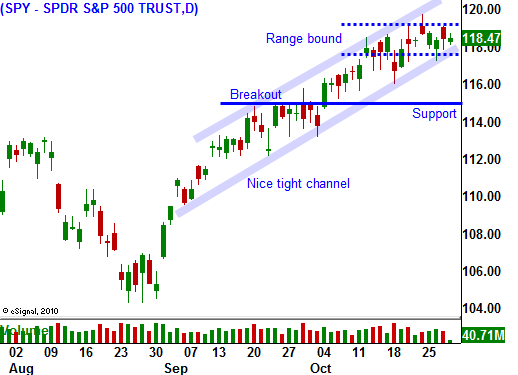