China Posts Strong PMI and US Manufacturing Imporves. Watch From the Sidelines

This morning, the market moved higher on strength in China. Their PMI rose to 54.7 in October, up from 53.8 in September. This was much better than expected and it is critical to a sustained rally in our market.

There are only two things that could spoil this rally and a slowdown in China is one of them. The entire world is counting on Asian growth to pull us out of this recession. For the time being, that piece of the puzzle is firmly in place.

The other potential spoiler is the credit scene in Europe. If four or five nations find themselves needing aid from the ECB or IMF, entire EU will break up. Germany is the strongest member and it was reluctant to help Greece. It realized that a little help would buy time for the EU to craft sovereign default policies so they agreed to backstop Greek bonds. Structural debt problems will force countries into default; it’s just a matter of time. A breaking point will be reached in the future and when Germany pulls aid, the entire EU will struggle to survive.

For now, PIIGs interest rates are climbing, but the auctions have gone well and fear has subsided. The United States has structural issues as well and a Republican victory will not solve our debt problems. Our nation’s entire revenue will be spent on entitlement (Social Security, Medicare, and Medicaid) and interest on our national debt. That’s right, 100% of our revenue will be spent on these items alone. Not one politician, Republican or Democrat dares to touch this political toxin. If they do, they won’t get elected.

Can you imagine the ad campaigns aired against someone who wants to lift the eligibility age for Social Security and who wants to reduce Medicare and Medicaid benefits? If they truly wanted to balance the budget, higher taxes would also be part of their campaign. This righteous candidate would be ridiculed and run out of town. The people we are about to elect will lead us down the road we are on, but hopefully at a slower pace.

Analysts are betting that Republicans will win back the House and they feel there is a 30% chance that they will gain control of the Senate. This is priced in and a better showing will be positive for the market. If Democrats stage a late run and the Republican margin of victory is slim, the market will decline. The election results will be much more important than Wednesday’s FOMC meeting.

The Fed is likely to ease, but they will gradually roll out QE2. The market won’t like the news initially, but it will quickly recover knowing that they are ready to take action.

This is a busy week for economic releases and that alone would be plenty for the market to digest. This morning, ISM manufacturing came in much better than expected. In the last few weeks, initial jobless claims have improved and that bodes well for Friday’s Unemployment Report. Analysts are expecting 60,000 new jobs, all of them coming from the private sector. As we have seen in recent months, the market will rally even if this number is within 100,000 jobs. Private sector employment is critical.

As a trader, you always want to be in the middle of the action. Each day stocks are moving higher and lower so the temptation to trade is ever present. After 20 years, I’ve learned that there are times when cash is king and this is one of them. The market has run up dramatically in the last two months and profit-taking could easily set in if the events this week disappoint. By the same token, earnings have been excellent and a breakout during a strong seasonal period is possible.

I will watch patiently from the sidelines and I will carefully monitor the price action. It might take a few days for conditions to settle down, but I will know when it’s time to get back in.

The news today has been good and the market will maintain a positive tone. We have made a new relative high and we are just below the highs of the year. The volume will pick up tomorrow as some of the election results pour in, but the real action will take place Wednesday. Reduce risk and watch from the sidelines. 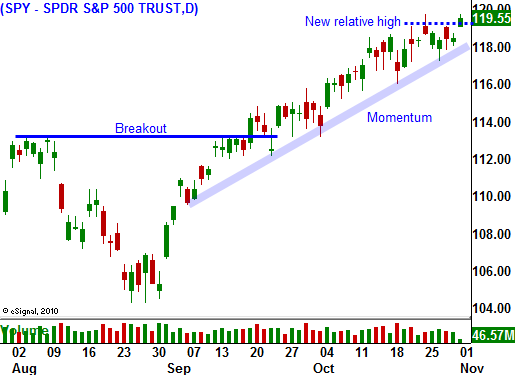