Cash Is King – Take A Few Days Off and Get Ready For Some Action!

Yesterday, the market traded lower early in the day on profit taking. Durable goods orders were a little on the weak side, but they did not impact trading. By mid-afternoon, prices gradually worked their way back.

We can expect choppy price action the next few days as traders prepare for major market moving events. Election results will start coming in Tuesday, but many races will be too close to call. Wednesday morning, the dust will settle and we will know the margin of victory for Republicans. They are expected to win back the House and if they come close in the Senate, the reaction will be positive.

Wednesday afternoon, the FOMC will announce their plans for QE2. I believe they will start slowly and there is room for disappointment. It Republicans win elections; the news from the Fed might be palatable. Traders could take comfort knowing that this serious course of action is going to unfold over a period of months. However, if Democrats stage a comeback in the polls, a wimpy round of monetary easing could be the straw that breaks the camel’s back and we could see a considerable decline.

Any market pullback will be short in duration. Asset Managers have been looking for an entry point and they will aggressively bid for stocks once support is established. They do not want to miss a year-end rally and stock valuations are attractive relative to bonds. More than half of the S&P 500 has reported and 85% of the companies have exceeded expectations.

By the same token, Asset Managers will not chase stocks ahead of major events. The market has rallied 14% in a matter of weeks and there is no urgency to buy stocks when they are at the top of their range. That is why the market is trading down after excellent economic news this morning.

Initial jobless claims dropped to 434,000 and that was much better than expected. This is the lowest number in three months and it should have sparked a rally. Stocks tried to move higher on the open, but profit-taking set in.

I am watching from the sidelines until next Wednesday. I want to objectively evaluate the price action and I can’t do that when I have a ton of money on the line.

My gut tells me that optimism is running a little too high. Landslide Republican victories and substantial quantitative easing are expected. After a huge market run-up, a pullback would be normal. Option implied volatilities have also dropped to low levels indicating confidence. Once bullish speculators are flushed out, the market can regain its momentum and challenge the highs of the year.

I liked the initial jobless claims number and the market bias should be positive. I’m not expecting a big move, just a positive tone. 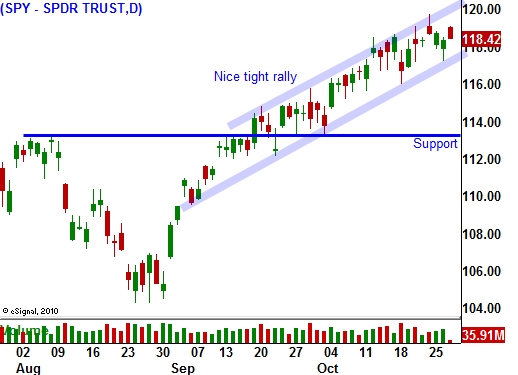