Christmas came early for the market last week and it got every “present” it wanted. Stocks climbed to a two-year high on good volume.

Republicans scored major victories and as a sign of good faith, President Obama suggested that the Bush tax credits could be extended for all Americans. The Fed will inject $600 billion into our financial system and that is $100 billion more than expected. China’s PMI rose to 54.7 and their economic growth is strong. ISM services and ISM manufacturing both exceeded estimates and they have reversed a recent trend lower. Friday, the Unemployment Report showed that 151,000 new jobs were added in October. September’s number was also revised higher and private sector job growth has posted gains during the last four months. These are all bullish developments and the upward momentum will continue.

Asset Managers don’t like chasing stocks. When the market took off in September, many were caught flat-footed. They have been waiting for a pullback to buy stocks and they haven’t gotten one. Now they will be forced to “pay up” or risk missing a year-end rally.

Investors have been piling into fixed income. This is a sign of pessimism and this flight to safety could end now that the market has broken out. Money will shift out of bonds and into equities. Option implied volatilities have collapsed in recent days and that means fear is getting squeezed out.

Europe is the only potential “fly in the ointment” and I don’t believe a credit crisis will spoil the rally in 2010. This morning, interest rates in Ireland are climbing. It could be the next “Greece” and we need to monitor this situation closely. A real problem won’t exist until four or five EU nations are on the ropes. At that stage, Germany will stop backstopping their debt and each country will have to fend for itself. We are many months away from this “flashpoint” and the market will continue to grind higher in the next two months.

The US is being criticized at the G20 meeting for its money printing. More than half of our debt is financed by foreigners and this practice will lower the demand for our bonds. Interest rates are at historical lows and when bondholders are repaid, the proceeds will result in a loss. That’s because yields are tiny and the dollar will have lost value relative to other currencies. This week we will auction bonds and it will be interesting to see if the demand falters.

China has been buying hard assets. They hold $2.5 trillion in foreign currencies and they are spending the “funny money” as fast as they can. They are buying natural resource companies and they are investing in emerging countries. They are no longer our largest debt holder and I do not believe they will be major participants in future bond auctions. They don’t want to buy an asset that is devaluing and they don’t want to support a weaker dollar. If the Yuan rallies, Chinese exports will decline because they are more expensive on a relative basis. If China does not participate in our bond auctions, demand will be weak and yields will jump.

The Golden Rule is simple. The man with the gold makes the rules. China has trillions of dollars of reserve currency and we have $14 trillion in debt. In the 1950s, Americans financed all of our national debt and we could have maintained our cavalier attitude. That is not the case today and China could easily flex its muscles by not participating in our bond auctions. A jump in interest rates would force us to reconsider QE2.

The economic news is light this week and Cisco is the biggest earnings release. Retailers will also post results throughout the next two weeks. They are priced for good news and they are not likely to have much of an impact on the market.

The momentum points higher and after all of the positive events last week, stocks should continue to rally. I am buying out of the money call calendar spreads (long December calls and short November calls with the same strike price) on stocks that have broken through resistance. I believe the market will continue to grind higher, but it won’t make an explosive move. The November calls will expire and the December calls should increase in value as stocks inch higher. Companies that generate revenues overseas are of particular interest.

Keep an eye on PIIGS interest rates and watch US bond auctions this week. Higher yields could be a sign of trouble. 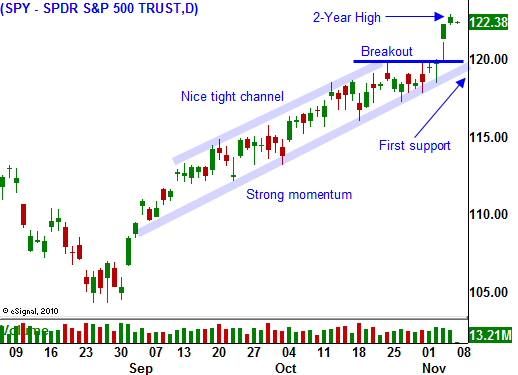