G20 Not Pleased With QE2. A Poor US Bond Auction Would Be The First Sign of Trouble.

The market is treading water after making a new two-year high last week. Major news events were all positive and confidence is high.

Perhaps the most talked about issue is QE2. Almost every country in the world is criticizing our monetary policy and the G20 meeting is providing the perfect platform. Even Republicans have made this a partisan issue.

I’m glad the Fed is taking heat for its action and I am completely against easing. We accused China of currency manipulation and here we are devaluing the dollar. When we purchase our own bonds it is like printing money. The more dollars we print, the less each one is worth. As the dollar tumbles, our goods and services become cheaper on a relative basis and exports increase.

For the worker who has to make $40 an hour, this maneuver might seem effective. Workers will be rehired as exports increase. Unfortunately, on a “real” basis, that worker is probably only making $30 an hour because his money won’t purchase what it used to. More than half of our homes have less than 10% equity or they are under water. If we devalue the dollar and inflation kicks in, home prices will rise and everyone will start feeling better about the economy. Banks will no longer be sitting on massive losses.

In short order, the focus will change from outsourcing to inflation. People will have jobs, but they will complain that their money won’t by them anything. Perhaps inflation is an easier foe for politicians to battle. They can explain higher prices, but they can’t explain why jobs are leaving this country.

In the end, $1 trillion worth of quantitative easing will only increase GDP by .25%. We will be buying our bonds at historic highs and when inflation starts to kick in, interest rates will rise. That means we will take a beating on our bond purchases when we unwind the position. Theoretically, the economy will be doing better and higher tax receipts will offset those losses. Without question, there will be inflation. If the economy does not recover, this maneuver will backfire in a major way.

Printing money is an act of desperation. It has been used unsuccessfully by third world countries that eventually default on their debt. Bondholders do not support this action because their money is worth much less when they are repaid.

China is one of our largest bondholders and they have been very passive in our recent auctions. They are buying companies and natural resources with their funny money (foreign reserves). When the dust settles, they will be left with hard assets, not a pile of paper. They have voiced their anger over QE2 and they could easily flex their muscle. If China decides to be a net seller of US Treasuries, yields will jump higher and the Fed will be forced to reconsider future easing. This action is much stronger than words and I will be watching our bond auctions closely. Today, we will auction $26 billion in 10-year treasuries.

China wants to keep its economy going and is very dependent on exports. They have all of the money and they hold all of the cards. If we plan to continue down the road we are on (spend more than we make), we had better not play “hardball” with them.

It will take massive entitlement reform, higher taxes and reduced spending to get us back on track. This will take decades and none of our elected officials are willing to commit political suicide.

Pain lies ahead and we can’t continue this ponzie scheme much longer. We are close to the flash point and we need to proceed carefully as we trade this rally. The key is to follow China’s lead. Invest in finite resources that will hold their value over time.

There aren’t many news items this week and I thought it might be fruitful to share some of my thoughts on quantitative easing. The momentum points higher and we should get a nice year-end rally. A horrible round of US bond auctions or a flare-up in PIIGS credit are the only potential spoilers. I don’t see that happening in the next six weeks, but keep your eye on interest rates. 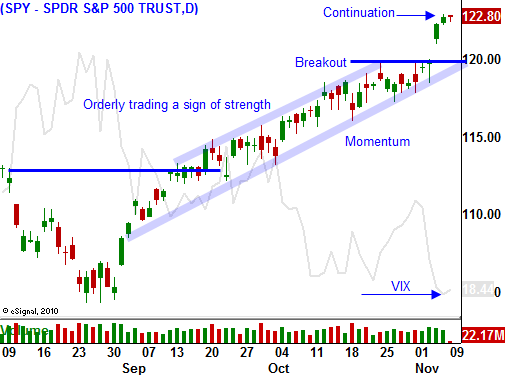