There’s that “fly in the ointment” I’ve been referencing. The one potential spoiler for this market rally originates in Europe. Credit concerns in peripheral countries are heating up.

For now, the risk is contained to PIG (Portugal, Ireland and Greece). Interest rates are climbing higher. Portugal’s 10-year yield jumped 60 basis points during its auction yesterday and the bid to cover was just over two. That is a weak showing and they are paying a premium of 4.7% over the German benchmark. Ireland is paying more than a 6% premium and Greece is over 9%. The trend has been higher and the risk is growing.

The problems run deep, but I do not believe they will come to a head in the next few months. Structural debt problems in Europe and the United States will smolder for many months before they ignite. When three or four EU members are in dire need of capital and interest rates approach 15%, the flash point will be near. Germany’s commitment will be tested and they are likely to step away when the heat grows too intense. Without that backstop, the entire EU will be in jeopardy.

Portugal, Ireland, Greece, Italy, Spain, England, Latvia, Bulgaria, Romania and Hungary all pose a credit risk. None of these countries are talking about reducing their national debt. They are struggling to reduce annual budget deficits. Weak economic conditions have lowered tax receipts and an aging population is draws greater retirement benefits each year. If this sounds familiar, it should.

The United States is in a similar situation. For the rest of our lives, Social Security will pay out more than it receives in payroll deductions. Baby Boomers are fearful that benefits will be restructured and they will snatch payments as soon as they turn 62. This will accelerate the problem. This is not a situation that developed overnight. Like a freight train, it’s been coming at us for decades. We refuse to elect politicians committed to restructuring entitlement programs, cutting expenses and raising taxes.

In an act of desperation, we are printing money to kick start the economy. Unfortunately, QE2 will only add .25% to our GDP and we have destroyed our credibility with other nations in the process. Inflation is a major concern and the Fed thinks it can step on the accelerator and slam on the breaks with pinpoint accuracy.

Structural debt problems will not go away, they will grow. The market will grind higher for the time being because stocks are attractively valued relative to bonds and economic conditions in China remain strong. In the US, we are seeing signs of economic improvement and that will carry us through year-end.

Today, initial claims dropped to 435,000. The 4-week moving average is lower than the levels we saw during the Lehman collapse. ISM manufacturing and ISM services improved last week and private sector jobs rose for the 4th straight month.

As an exercise today, I thought I would add the GDP of countries that have massive national debt/structural problems and sluggish economies. I will compare that to the GDP of “emerging nations”. This was not an extensive study; it was a crude measure to help me gauge global growth.

On the first list I included the US, Japan, the EU, and the UK. In the second list, I included China, India, Brazil, Russia, Australia, Indonesia, South Korea, Mexico, Thailand, Singapore, and Vietnam. The first list generates $37.6 trillion in GDP and the second generates $12.8 trillion. If you listen to analysts and the media, you might believe that global growth could pull us out of a recession. Common sense tells me that 25% of the world’s GDP will not pull the other 75% out of a recession.

Brazil, Russia and Mexico are included in the list and they have a history of credit issues. They account for $3.7 trillion in GDP.

As long as the market believes that emerging countries can pull us out of this recession and that budgets in Europe and the US can be balanced, the market will rally. Long-term issues will keep this rally from getting ahead of itself. Without structural reform to retirement benefits, credit markets are a ticking time bomb.

Stay long and focus on companies that sell to emerging markets and get paid in foreign currencies. Stocks should settle into a range before moving higher and they need time to gather strength. If the market closes below SPY 120, lighten up quickly, but don’t go short.

If credit concerns in Europe were not flaring up, I would have suspected a weak US 30-year bond auction this afternoon. Now, I think it will go well due to a flight to safety.

Veteran’s Day tomorrow will result in quiet trading. Please thank the brave men and women who have defended freedom around the world. 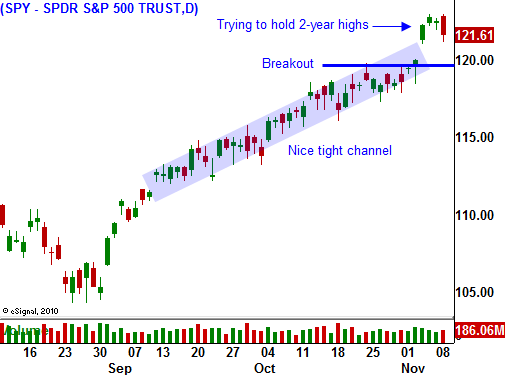