SPY 120 Is A Critical Level. Next Week It will Break or Hold. Wait and See.

The market has run up dramatically in the last two months. It is only normal to see a little selling pressure after a 16% rally. President Obama suggested he might extend the Bush Tax Credits to all Americans and that was the catalyst last week.

Since then, stocks have struggled to hang onto those gains. Each day prices drift lower and today is no exception. Credit concerns in Europe are starting to heat up and that has put downward pressure on global markets. The EU is watching the situation closely and some believe that financial aid will be needed.

Germany is trying to rework the policies regarding EU bailouts. They see the writing on the wall and they do not want to go down with the ship. The EU finance ministry will meet next week and these discussions will be critical. One-by-one, new sovereign credit issues will arise until the dam breaks. I still believe that flashpoint is many months away, but credit issues can go from bad to disastrous overnight. We witnessed that two years ago with the banking crisis and we need to watch European interest rates very closely.

In the next two months, we can expect Irish austerity programs and a financial backstop from the ECB/IMF. Credit concerns will calm down and the market will recover. Stocks are cheap and traders still believe that 25% of the world’s GDP (China, India, Brazil, South Korea, Indonesia, Mexico and Russia) can pull the other 75% (US, EU, UK and Japan) out of a recession.

I like stock valuations and I am not having any difficulty finding strong prospects. Unfortunately, should a credit crisis erupt, you can throw valuation out the window.

The market was able to claw its way back yesterday and prices are holding up fairly well this morning. Support at SPY 120 needs to hold if we are going to have a nice year end rally. If it fails, we are likely to get a swift decline and a rebound back to these levels late in December.

Our global trading partners are not happy with our quantitative easing plans. Almost half of our national debt is financed by foreigners and they can protest by not buying our bonds. Weak demand would immediately result in higher interest rates and the Fed would instantly recognize its mistake. We hold massive bond auctions every other week and we need their participation. Interest rates have already started to creep higher since the FOMC statement and I suspect that foreign bondholders are selling.

There are signs of economic improvement and the Fed should stop QE2. Private sector job growth has improved four straight months and initial jobless claims are also heading in the right direction. ISM services and ISM manufacturing also came in better than expected. At best, QE2 will add .2% to our GDP.

Next week, the news is fairly light. PPI is likely to come in “hot” and CPI should be benign. In any case, the Fed wants to see some inflation so higher prices should not be a surprise. Earnings season is just about over and next week’s releases will be dominated by retailers. That sector is trading at a six-month high and I don’t believe there is much upside left. Heading into the holiday season, I don’t see much downside either.

The market lacks a catalyst and prices are likely to stay in a tight range. After consolidating, buyers should be able to push stocks higher into year-end on light volume.

As a trader, it is difficult to set on the sidelines. I feel that is the best place to be right now and I want to see if conditions in Europe settle down or worsen. That question will be answered next week. If SPY 120 holds, I will start selling some out of the money put credit spreads on commodity/energy stocks. If SPY 120 fails, I will wait patiently for support and I will buy calls after bullish speculators are flushed out.

This is a holiday like setting and the action could be very light for a few days. Keep your powder dry. 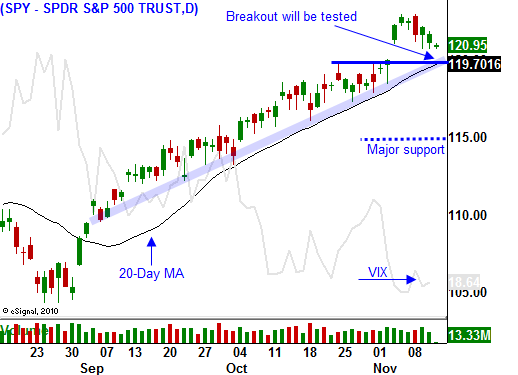