Last week, the market struggled to hold on to gains and it gradually drifted lower the entire week. The breakout above SPY 120 now represents a support level and it has been tested.

If that support level fails, bullish speculators will get flushed out. We will see a round of profit-taking and a brief, sharp decline. Major support at SPY 115 will hold and buyers will step in well before that level is reached.

Asset Managers do not like to chase stocks and they have been waiting for a pullback. Once support is established, they will “buy the dip”. Stocks are attractively valued relative to bonds and they want to position themselves for a year-end rally.

This morning, M&A activity and positive economic news provided a positive backdrop for stocks. Caterpillar is paying a 30% premium for Bucyrus. Both companies are well positioned for overseas mining equipment demand. On the economic front, business inventories hit a two-year high and most importantly, sales increased .5%. Retail sales climbed 1.2%, the most in seven months. That was much better than expected and it bodes well for earnings this week since they will be dominated by retailers.

Overseas markets were also up overnight and all of the pieces were in place for a nice rebound this morning. Unfortunately, the market has stalled and that is a little concerning given all of the bullish news.

Credit concerns in Europe are starting to heat up again. Interest rates in Portugal, Ireland and Greece are swiftly moving higher and risk is elevated. Germany is the cornerstone of the EU and they do not want to get stuck paying the bill for future bailouts. Germany wants current bondholders to take a haircut before ECB/IMF aid is granted. The EU Finance Ministry is holding a meeting today and tomorrow and the rhetoric could reignite credit concerns.

The news is fairly light this week. PPI and CPI will be released and some inflation is expected. The Fed wants some inflation and it fears disinflation/deflation. Producer prices have been moving higher, but companies can’t pass on those costs to consumers because demand is soft. I’m not expecting a major reaction to these numbers. Initial jobless claims on Thursday will also be important. Private sector jobs have grown four straight months and last week’s initial jobless claims number was much better than expected.

Earnings season has passed. That means that economic news will have to carry this market higher into year end. Positive retail sales and improving employment could be the catalysts.

If the market does not break below SPY 120 this week, we are likely to see a gradual grind higher through year end. The rally since September has been very orderly and that is a sign of strength. The volume is likely to be light and traders should be able to “goose” the market higher. This translates into bigger bonuses.

From a trading standpoint, a decline and a snapback rally would be desirable. It would result in active trading and higher volumes. I am keeping my powder dry and I will sell a few put spreads this week if SPY 120 holds. If the market grinds higher, my exposure will be small.

If the market breaks down, I will wait for support and I will be ready to buy calls. Under this scenario, I will be more aggressive.

After a round of excellent news and mild profit-taking last week, I expected to see a better rally this morning. Prices feel a little soft and I suspect the downside will be tested. Wait for one of the two scenarios to play out this week and then take action. 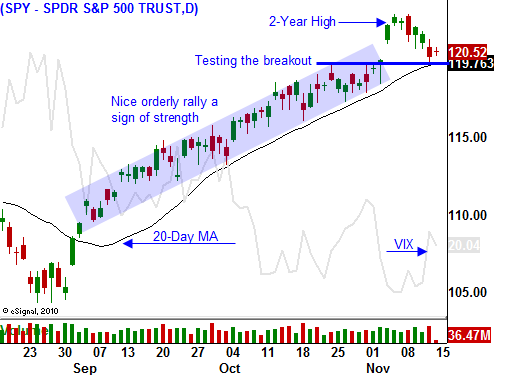