The Breakout At SPY 120 Failed. Bullish Speculators Are Bailing!

Yesterday, the market got a good round of news and prices looked like they would rebound after slipping last week. Business inventories were better than expected and sales rose .5%. Retail sales climbed 1.2%, the most in seven months. M&A activity was also strong and overseas markets were positive. The gains held for most of the day, but profit-taking set in late in the day and the market finished flat.

This morning, we have broken below critical support at SPY 120. If we close below this level, bullish speculators will bail on their positions and we will see a swift decline. The PPI came in weaker than expected and inflation is not a concern. Industrial production was flat and economists had expected a gain of .3%. Warm weather was actually to blame and utility output dropped 3.4% when heating demand declined. Manufacturing was up .5% and that is more significant than the overall number. In both cases, the news was “market friendly”.

The earnings news was also decent. Wal-Mart and Home Depot are trading higher after the releases. This week will be nominated by retailers and good results are expected.

Credit concerns in Europe are weighing on the market. Irish banks are in desperate need of financial aid and many EU members are urging Ireland to tap into emergency funds established by the ECB/IMF. Ireland is reluctant to do so and the problem continues to fester. Once traders smell blood, they attack. Soon, Irish interest rates will skyrocket and they will be forced to take the aid. Ireland is financed to the middle 2011, but the next six months will pass quickly.

The European Finance Ministry is in session and they are going to be busy in the next 12 months. Ireland, Portugal, Spain, Hungary, Latvia, Bulgaria and Italy could all come knocking. Germany wants current bondholders to take a haircut before aid is extended. In other words, they want investors to take losses before German taxpayers put their money at risk. The conversations will be heated and Germany is reluctant to backstop everyone else’s reckless spending.

In Germany decides that it does not want to support a bailout program, a major credit crisis will unfold and the entire union could collapse. I don’t see that happening until four or five nations including one major EU member (Spain or Italy) are on the ropes. That could be many months away, but the flashpoint is approaching.

Once the crisis spreads through the EU, it will quickly spread to the US. In fact, we might already be seeing that. In April, when Greek interest rates started to rise, investors piled into US Treasuries. That flight to safety pushed interest rates down and the dollar rallied. This time around, the reaction is much different. The dollar has barely rallied and interest rates in the US are moving higher. In the second chart below you can see the recent price movement. The problems in Europe are more severe this time around because two new nations are at risk (Ireland and Portugal).

There could be a few reasons why US interest rates are moving higher. Economic conditions are improving and as activity rebounds, the Fed will take its foot off of the gas pedal. I don’t see this as the culprit for higher rates. The Fed is committed to keeping interest rates low and they recently announced $600 billion worth of quantitative easing. Furthermore, the conditions are stable, but they are far from robust.

Inflation is another reason that interest rates could be heading higher. As we saw in today’s PPI, wholesale prices are stable and this is not the cause.

The third reason that interest rates are moving higher is risk. Investors are worried that our deficits are out of control and that a 3% yield on the 10-year bond does not provide an adequate return. This could be a very real concern. California needs to raise $14 billion and it may need help from the government. Many other states are one step behind and this could be our next “banking crisis”.

Finally, our lenders could be forcing us to abandon our QE2 program. Almost half of our nation debt is financed by foreigners. Japan and China hold 40% of it. If they don’t participate in our bond auctions, interest rates will climb. If they decide to become net sellers of our bonds, interest rates will jump. Both countries are trying to keep their currencies cheap and since the Fed has announced its plans, rates have jumped. They could force the Fed to abandon QE2. Bernanke knew this risk existed and that is why they decided to roll QE2 out slowly. There is also a great deal of political opposition to QE2 in the US and the market might be pricing in a halt to easing.

We need to watch the US bond auctions closely. Stocks are slipping further into the red and it looks like we will test the downside.

As I mentioned yesterday, this is the best scenario from a trader’s perspective. It assures us of two sided action. The alternative would have been a quiet, low volume rally into year-end and it would have been like watching paint dry.

I am in cash waiting for an opportunity. During this phase of the Euro credit crisis, US Treasuries are not a safe haven. Consider buying some calls on TBT.
.
. 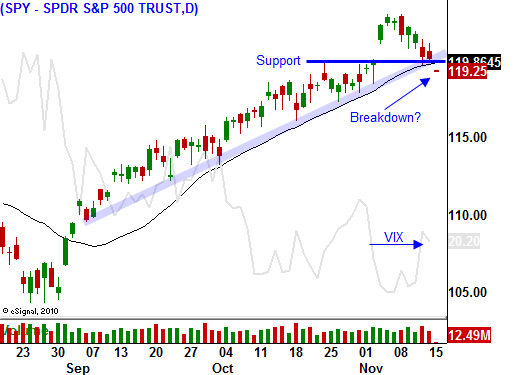 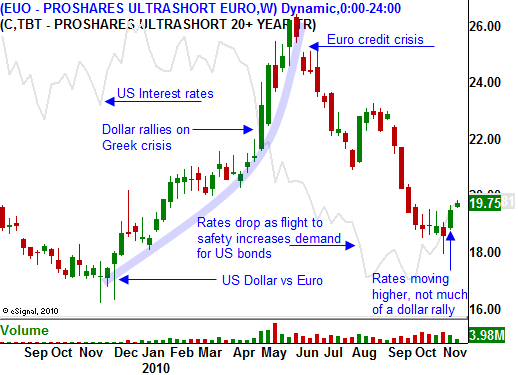