Yesterday, the market sold off sharply, breaking support at SPY 120. Bullish speculators that got long were flushed out.

The decline we saw yesterday reminded me a lot of the price action we witnessed in April. Earnings season sparked a nice rally to new highs; fear was low (declining implied volatility) and credit concerns were heating up in Europe. Once the market cracked, a swift round of selling ensued.

Prices stabilized by midday and the selling felt like profit taking, not shorting. The EU Finance Ministry is meeting this week and they are trying to resolve the banking issue in Ireland. The country does not want financial aid for the entire nation. They do not want to be fiscally controlled by other countries when the real problem rests with the banks. The problem is that the banks could take the entire country down if they don’t reach a solution soon. Many feel the EU/IMF will try to provide aid to the banks.

There were also concerns that China could raise rates. I don’t see this as a negative; I see it as a positive. Economic conditions are so strong that they are trying to slow activity down. If they do raise rates, the Yuan will rise in value and perhaps the US can stop printing money.

Earnings have been excellent and economic conditions are decent. Employment is gradually improving and we’ve seen private sector job growth for 4 months in a row. Tomorrow’s initial jobless claims number will be important. The four-week moving average is moving lower and that is a good sign. In yesterday’s industrial production number, manufacturing rose .5%. That is also positive. Retail sales came in better than expected and we could have a decent holiday season.

Interest rates have been climbing and that is a new development. At a time when the Fed is trying to push rates lower, the exact opposite is happening. When the credit crisis in Europe unfolded last summer, investors piled into US Treasuries and yields dropped. When fear in Ireland ignited yesterday, we did not see massive buying in US Treasuries. Rates stayed elevated through most of the day. This action tells me that we have seen yields bottom out.

There could be a number of reasons why this is happening, but I feel our foreign investors are flexing their muscles. Almost half of our national debt is financed outside of this country. The EU, Japan and China have been fighting to keep their currencies relatively “cheap”. China and Japan account for 40% of our foreign debt. If they don’t bid for our bonds, we will have to pick up demand somewhere else. They are huge participants and rates would rise in their absence. Better yet, if they wanted to prove a point, they would start selling some of their US bond holdings. Rates would spike and the Fed would be forced to turn off the printing presses. The beauty of this is that they can force us to change course without saying a word.

From a more simplistic perspective, investors don’t want to lend money when the currency is devaluing. They won’t get their principal back when the loan is repaid.

Republicans are also prepared to fight quantitative easing. It has not worked to this point, it will only add .2% GDP, we risk inflation and the practice destroys our credibility. The market is pricing in a halt to QE2. Of course, when the program is abandoned, the Fed will say that it was effective and economic conditions don’t warrant future easing.

We need to keep a close eye on Europe. Problems could escalate if the Irish crisis is not resolved this week. Portugal could also come into play. If fear starts to escalate, the SPY could test 112. I believe that support level will hold and it will set up a year-end buying opportunity. The EU will come up with a short-term solution and the market will rebound.

Credit issues in Europe and the United States will grow in 2011. For now, be patient and wait for support. When it is established, I will be selling put credit spreads on companies that generate overseas revenues. The implied volatilities spiked yesterday and the premiums are attractive.

If bulls can’t get a rally going by early afternoon, look for sellers to test the downside. If there is not any positive news from the EU meeting, a late day decline is even more likely.

I will be hosting a Live Webinar tonight with extensive market analysis and two new option trades. Sign-up Now!
.
. 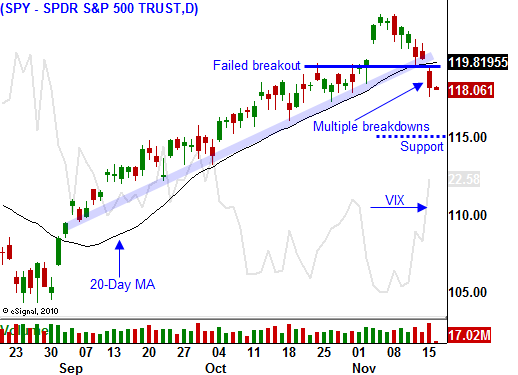