Since making a new two-year high a couple of weeks ago, the market has drifted lower. This week, it failed to hold support at SPY 120 and bullish speculators were flushed out. Sentiment was a little too optimistic and credit concerns in Europe brought it back in line.

Irish banks are on the ropes and they could jeopardize the country’s financial system. Ireland does not want an EU/IMF bailout because the entire country’s budget would be scrutinized. EU Finance Ministers are meeting this week and a resolution is likely. Unfortunately, structural issues will not be addressed and the problem will resurface.

A few months ago, all we had to worry about was “little ole Greece”. Now Ireland has joined the credit crisis party and Portugal is on the doorstep. Germany is the cornerstone to the entire EU and it wants to reform financial aid policies before it gets stuck paying the bill. They propose that current debt holders take a haircut before aid is provided.

The underlying message is that the entire EU is on very shaky ground. As long as the problems are small, they can be tackled. Structural issues are not being addressed and deficits will grow to unsustainable levels until a crisis is reached. Each country will be forced to fend for itself.

The United States is not far behind and entitlement programs are gutting this country as baby boomers retire. States are running massive deficits and this will be the next financial crisis in the US. They are $350 billion in debt right now and states are projecting another $100 billion in deficits next year.

I mention the credit crisis because it is the only “fly in the ointment”. Markets can deal with anything except a credit crisis. Stock valuations are cheap, economic conditions are improving and interest rates are low.

Interest rates have been moving higher ever since the Fed announced QE2. They are taking political heat domestically and around the globe. Lenders do not want to hold on to bonds when the currency is devaluing. As they liquidate holdings, interest rates rise. The warning shot has been fired and the Fed should recognize their mistake. If they continue to print money, interest rates will spike (the opposite of what they wanted).

There are also concerns this week that China might raise rates. I see that as a positive, not a negative. Their economic growth is so strong that they want to slow it down. Higher interest rates will strengthen the Yuan and we can stop devaluing the dollar.

The market has almost erased the losses from Tuesday. It wants to move higher and Asset Managers are buying stocks. The EU will provide aid to Irish banks and the “can” will be kicked down the road. The credit crisis will grow and it will keep bullish sentiment in check. That means a nice orderly rally will result.

I am selling put spreads on companies that generate substantial overseas revenues and that cater to emerging markets. That includes heavy equipment manufacturers and agricultural/mining companies. I will continually keep one eye on European interest rates. For the rest of the year, I expect positive price action. 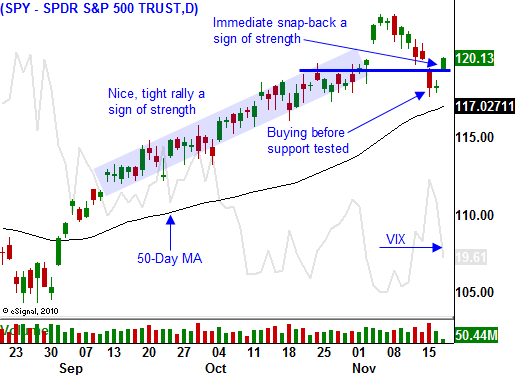