Credit Concerns In Europe Will Ease. Sell Put Spreads On Support At SPY 117.50

Heading into the November elections a few weeks ago, the market was priced for perfection. Earnings expectations were high, landslide Republican victories were expected and a round of quantitative easing was projected to start immediately. The market got what it wanted, but it did not expect President Obama to reconsider extending the Bush tax credits for all Americans. That piece of news pushed the S&P 500 to new two-year highs.

Since then, the market has gradually been giving back those gains. President Obama’s “olive branch” to Republicans might be withdrawn as both parties reconvene for a “lame duck” session. Interest rates have been climbing since the FOMC statement and QE2 has drawn criticism domestically and internationally. Foreign debt holders could force the US to abandon money printing by selling their US Treasuries and by not participating in future auctions.

The market had clearly gotten ahead of itself and credit concerns in Europe sparked a round of profit-taking last week. Ireland’s banks are in dire straits and they need a capital infusion. The country did not want aid from the EU/IMF because its fiscal spending would come under scrutiny. They simply wanted to secure capital for their banking system. Over the weekend, Ireland conceded and they have agreed to take financial aid (€90 billion).

During the last few months, the European credit crisis has calmed down. Bond auctions in Greece, Portugal, Spain and Ireland have gone well and the bid to cover as been higher than 2. I believe that is because the ECB has been buying their bonds. By supporting the auctions, they give the appearance that demand is strong and the countries are able to secure financing.

In the last few weeks, interest rates on those sovereign bonds have jumped and the ECB can no longer keep the “genie in the bottle”. The “backdoor tactic” no longer worked and they needed to force a “front door” approach on Ireland. Many European banks have substantial investments in Ireland and a collapse would severely impact balance sheets. It would start a domino effect. Many analysts feel that Portugal is next in line and aid will quickly be forced on them before conditions worsen. Like Ireland, the government does not feel it needs a bailout.

Things will get very interesting in the next few months. With Greece, Ireland and Portugal “under wing”, the focus will quickly shift to Spain. It is “too big to bail” and “too big to fail”. The unemployment rate is greater than 20% and they account for 12% of the EU’s GDP. Spain has defaulted on their debt more than a dozen times in the last two centuries and their track record will come back to haunt them.

As the number of bailouts increases, selling pressure will mount on German bonds. They are backstopping all of this debt and they are very nervous. During last week’s EU Finance Ministry meeting, they pushed to change bailout policies. Germany wants current debt holders to take massive “haircuts” (write-downs) before aid is extended. In other words, Germany does not want to pay for everyone else’s fiscal irresponsibility. In 2011, the EU will fight for its survival and structural debt problems will resurface.

Last week, the market also declined on worries that China would raise interest rates. This is a good reason for interest rates to rise. Economic conditions are robust and the government is trying to carefully apply the brakes. They did raise bank reserve requirements, but they did not raise rates. This was a more “dovish” action than was expected and it should be viewed as “market friendly” when the dust settles in a few days.

Today, we are seeing new worries from Europe. Trading will be relatively light this week as we head into the Thanksgiving holiday. GDP, durable goods orders and initial claims should all be positive for the market. Perhaps the biggest event will be the FOMC minutes. Traders will be able to gauge the Fed’s QE2 level of commitment.

The credit concerns in Europe are very legitimate. However, I do not see this crisis escalating ahead of the holiday season. This period tends to be very bullish for stocks and traders want prices to move higher so that bonuses are bigger. The countries currently needing financial aid a relatively small and a quick cash infusion will calm nerves.

The momentum since September has been very strong and buyers will be looking for an entry point. Support was barely breached last week and the market instantly snapped back. Earnings have been excellent, economic conditions are improving (ISM service/manufacturing, unemployment, Philly Fed, retail sales and initial claims), interest rates are low (CPI/PPI benign) and China’s growth is strong.

Wait for today’s selling to abate. I believe we will find support around SPY 117.50 (last Tuesday’s low) and the market will rebound into next week. This decline is exactly why I have been selling out of the money put spreads. I’m a safe distance from the action and I am not sweating today’s move.

Retailers posted nice earnings and the retail sales number was strong last week. That should bode well for “Black Friday”.

Sell put spreads on companies that generate revenue in emerging markets. I like commodity producers, heavy equipment manufacturers and oil service companies. If support at SPY 115 fails, buy back put credit spreads and wait to see if support at SPY 112 holds. I am not expecting this to happen, but when credit fears are present, you have to be ready for anything. 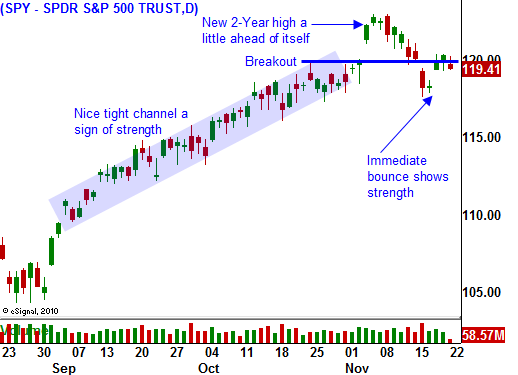