The Market Can Handle War, Terrorism and Recessions. It Can’t Handle A Credit Crisis!

Yesterday, the market started the week on a sour note. The S&P 500 was down more than 13 points early on. The European credit crisis sparked fear over the weekend and that set a negative tone for our market.

Ireland was forced to take aid from the ECB/IMF so that it could support its banks. It was trying to isolate the problem and just get aid for its banks, but that attempt failed. Ireland does not want its fiscal spending to come under scrutiny and it held off until the bitter end. This news should have calmed nerves, but it did not.

I suspect that the ECB/IMF has been actively purchasing sovereign debt in peripheral EU nations for many months. By supporting the bond auctions, they create the impression that demand is strong and the practice keeps interest rates lower than they would be without intervention. Traders knew that Ireland was on the ropes and they started selling their Irish holdings. As a result, interest rates started to jump higher and the ECB/IMF had to use a more direct approach. By backstopping Irish debt with a €90 billion aid package, they hoped to instill confidence.

The market knows that a European credit crisis looms. The ECB/IMF has been busy buying PIIGS debt and each week a new crack in the dam appears. Like Greece and Ireland, Portugal swears it does not need financial aid. It is in everyone’s crosshairs and interest rates are already jumping. If the bleeding stopped at these three countries, the market could shoulder the news. Unfortunately, Spain will be the straw that breaks the camel’s back.

Short-term interest rates in Spain doubled in just three weeks. It held an auction of 3-month and 6-month bills yesterday. They were only able to sell €3.26 billion and that was at the low end of the range. The yields on three-month bills rose to 1.74% compared to .95% three weeks earlier. Short-term rates don’t normally move much and this is a clear sign that traders don’t want to invest in Spain. It accounts for 12% of the EU’s GDP and its economy is greater than Greece, Ireland and Portugal combined. It is too big to fail and too big to bail.

As I have been saying for many months, the market can deal with ANYTHING except a credit crisis. North Korea bombed an island off of South Korea and rightfully, that is the headline this morning. It seems like it is the reason for this morning’s market decline, but it is not. North Korea has alienated Russia, China, South Korea and Japan. These global powerhouses are not thrilled with the idea of a nut case dictator running around with a nuclear bomb in their backyard. They will join forces and stop this problem before it gets out of hand. South Korea’s stock market was only down .75% and it is in the heat of battle. This situation is weighing slightly on the market, but European interest rates are the real concern.

This morning, Q3 GDP came in much better than expected. It was revised up to 2.5% from 2% a month ago. Perhaps the biggest news of the week will come this afternoon when the FOMC minutes are released. Traders will be able to gauge the Fed’s level of commitment for QE2. A consensus among Fed officials would be “market friendly”. Tomorrow, durable goods orders, initial jobless claims and consumer sentiment will be released. I am expecting the economic news to be positive for the market. However, it will not outweigh credit news from Europe.

Europe, the US and Japan have massive debt levels. Combined, we represent 75% of the world’s GDP. Structural debt problems are manifesting and the demographics will accelerate deficit spending. Workers are aging and as they retire they will be drawing benefits instead of contributing to retirement pools. Politicians that suggest reform are not elected and this “can” has been kicked down the road for decades.

In the US, Social Security is already paying out more in benefits than it collects from payroll deductions. This was not scheduled to happen for another six years. Baby boomers are just starting to retire and the numbers will grow each year. We are sitting on a global powder keg. The fuse has been lit; we just don’t know how long it is.

From a trading standpoint, timing is everything. Those who shorted this market prematurely have been carried out in body bags. Improving economic conditions, low interest rates, quantitative easing, strong earnings, attractive stock valuations and growth in emerging markets have pushed prices to two-year highs.

When the “big hurt” happens, the selloff will come quickly. Major support levels will be breached with ease and that will be a signal to get short and stay short. The best play is to buy back month (6 months out) way out of the money puts on companies that need credit to transact daily business. This is the time to research stocks that were nailed in 2009 and have rebounded.

I don’t see this sell off happening in the next six weeks and seasonal strength should support this market. Even a small bid in PIIGS debt will stabilize interest rates and fear will ease. Improving economic conditions and the holiday season will revive optimism and the market will make a nice little run into year-end.

I don’t trust this rally and I will sell a limited number of put credit spreads on strong stocks. I want to see support at SPY 117.50. If we bounce right here, I will enter trades. If we go down and test that level (the lows from last Tuesday), I will add at that time. As long as the SPY stays above 115, these positions will be fine. If we break that level, I will buy back my put positions and take my lumps. The next major support is SPY 112. I don’t expect this to happen this year, but if it fails – GO SHORT. A breakdown of that magnitude would signal that credit concerns are ready to blow up.

The trading activity will dry up after the open tomorrow and it will be light on Friday. Traders are reducing risk and they don’t want to get blindsided by news when they take time off. If Black Friday goes well (I think it will) conditions will stabilize. Retailers have posted good earnings, the retail sales number was strong last week and there are lots of discounts to attract shoppers.

The decline could pick up steam this afternoon, wait for support and don’t get aggressive. 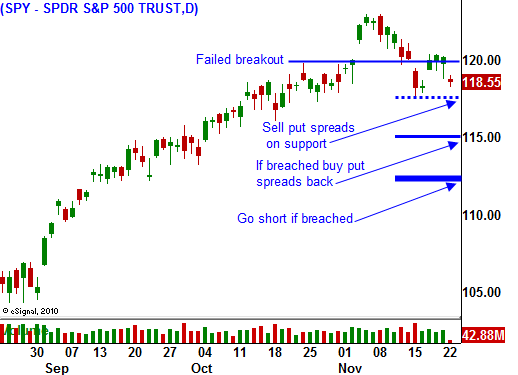