In the last two weeks, the action has started to pick up. We are seeing two-sided trading activity and the volatility has increased. The European credit crisis has investors scared and we have seen profit-taking.

This is a very real concern and conditions will continue to deteriorate as deficits grow. Traders had Ireland in their crosshairs and the ECB/IMF had to provide $114 billion in support. We have grown accustom to talking about trillions of dollars and this hardly seems like a large amount of money until you realize that this aid breaks down to $27,000 for every man, woman and child. Portugal is next in line and interest rates are screaming higher. In matter of months, Spain will be in the hot seat. Short-term interest rates have doubled there in a matter of weeks.

As I mentioned yesterday, Ireland would introduce new austerity programs and tensions would ease. I also said that even a small institutional/sovereign bid in PIIGS debt would stabilize interest rates and the market would rally back. Major structural problems have not been addressed and the fuse to this powder keg has been lit. Massive budget deficits will grow exponentially as workers retire and draw benefits.

For now, the market wants to focus on seasonal strength. Corporate earnings have been excellent, balance sheets are strong, interest rates are low, inflation is contained, China’s growth is strong and our economic conditions are improving.

This morning, initial claims came in at 407,000. That was much better than expected and the four-week moving average is steadily moving lower. This number bodes well for the next Unemployment Report. Yesterday, GDP climbed to 2.5% it was also better than expected. Retail sales have been strong and this morning consumer spending and consumer confidence came in above estimates. The table is set for a rally into “Black Friday”.

This is traditionally a strong seasonal period for the market. Historically it has done even better when economic conditions are improving and during years when a midterm election is held.

I don’t want to downplay the significance of a credit crisis in Europe, but a little money can go a long way in these smaller countries. Nerves will be pacified for the next six weeks and we will see a nice year-end rally. I am playing the rally, but I am keeping my distance by selling out of the money put credit spreads on strong stocks. As long as the SPY closes stays above 115, these positions will be fine.

The market has almost erased yesterday’s losses and a close above SPY 120 would be bullish. I still favor companies that generate revenues in emerging markets.

When the credit crisis Spain becomes the focal point, it will signal the beginning of a major financial crisis. It is too big to fail and too big to bail. I don’t see that happening for a couple of months, but the concerns will flare up early in 2011.

I will not be publishing daily market comments or a new Daily Report on “Black Friday”. The action will be brisk at the open and it should settle down quickly. The Live Update table will be functioning and it will point you to the hottest stocks. Focus on the ones that are consistently rising to the top of the table.

Have a safe and happy Thanksgiving! 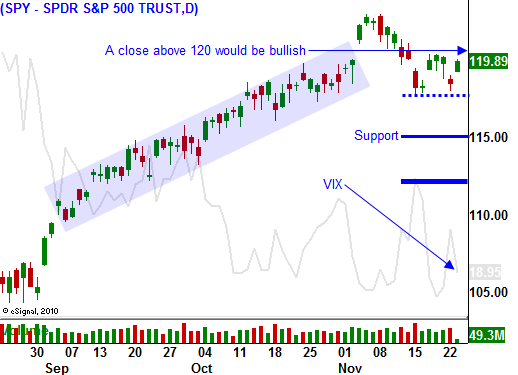