Last week, the European credit crisis weighed on stocks and those fears are keeping a lid on the market today. Decent shopping results from “Black Friday” have not been able to part these storm clouds.

The European Finance Ministry outlined the $114 billion aid package for Ireland this weekend. This financing should secure its banking needs. While the number does not sound very large, it equates to $30,000 per man, woman and child. The focus has quickly shifted to Portugal and Spain. As more and more countries line up for aid, interest rates in Germany climb higher. They are reluctantly back stopping weaker nations and this aid is tearing the country apart.

Germany wanted investors to take a “haircut” on existing loans before aid was granted. This would mean massive write-downs for banks and we might get a glimpse of their risk exposure to sovereign debt. This proposal would give the aid money greater standing and it would not be lumped in with loans that will have to be renegotiated in the future. Ireland received aid and no “haircuts” were taken.

The ECB/IMF has been buying sovereign debt for months in an effort to contain fear. Investors have been liquidating sovereign debt positions and that is causing interest rates to jump higher. This genie is out of the bottle and the ECB/IMF can no longer mask it. Structural problems will bankrupt countries and entitlement reform is being met with rioting. European interest rates are climbing as default risk increases.

In the US, we have our own debt issues to deal with. States are running massive deficits and they have structural problems. Muni bond interest rates spiked last week and credit concerns could work their way from the bottom up domestically. The US has structural problems on a national level (Social Security, Medicare and Medicaid), but our reputation and status as the global reserve currency is keeping us afloat.

Last summer, we saw a flight to quality into US treasuries when Greece stumbled. This time around, Ireland, Portugal and Spain are lined up in front of a firing squad and the situation is dire. You would expect to see US treasuries rally and interest rates decline especially when our government is buying its own bonds. That is not the case. Interest rates in the US are stable and that tells me they are ready to move higher. At this juncture, it is difficult to determine if the selling is because of fear or if it is because economic conditions are improving.

In the last few weeks, signs of a gradual recovery are surfacing. Initial jobless claims have been dropping, GDP came in better than expected and retail sales were decent. This is going to be a very busy week from an economic standpoint. Chicago PMI, consumer confidence, ADP employment, ISM manufacturing, construction spending, auto sales, The Beige Book, initial claims, ISM services, China’s PMI and the Unemployment Report will be released. I am expecting excellent results.

No matter how great the temptation, I have learned not to short the market into year-end. The seasonality is very strong and Asset Managers want to “goose” the market to enhance performance. Even a small bid in light volume can push the market higher. I believe the economic statistics this week will produce a rally and traders will momentarily take their eye off of Portugal and Spain.

Nice corporate profits, strong balance sheets, low interest rates and improving economic activity will calm nerves. However, I am not looking for a runaway rally. We will be lucky to get back to the highs of the year. Option implied volatilities are on the rise and that has set up nice put credit spreading opportunities. If support at SPY 117.50 holds today, I will add to my positions. I am focusing on companies that generate revenues in emerging markets and I am selling spreads below major support levels to distance myself from the action.

If SPY 117.50 fails, major support at SPY 115 will be quickly tested. My positions won’t suffer much damage at that point, but that level must hold. If it does not, I will buy back my put credit spreads and I will wait to see if support at SPY 112 holds. Take a neutral to slightly bullish approach to the market and try to sell some rich option premiums. 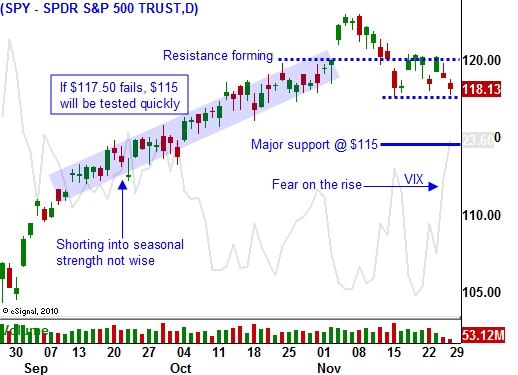