Economic Releases Will Be “Friendly”. Lighten Up On Long Positions!

This morning, the market has been able to shrug off European credit concerns. The ECB suggested that it would lend as much money to as many EU members as it has to. It is fully committed to keeping the union together. This sounds nice, but is not practical.

In essence, the ECB will turn on the printing presses until the market decides that the Eurodollar isn’t worth the paper it’s printed on. Countries will continue to run massive deficits without any consequences. Germany has a vested interest in seeing the EU survive, but it will be pushed to the limit when countries refuse to reform retirement benefits. This “warm fuzzy” by the ECB means nothing and the market sees right through the statement.

The market is rallying because of strength in Asia. China’s PMI rose to 54.7 and monetary tightening has not stalled growth. In yesterday’s comments, I pointed out that this piece of news should be “market friendly”. This is a major piece of the puzzle and if conditions change, it will send global markets into a tailspin.

Economic conditions in the US are also improving. This morning, the ADP employment index showed that 93,000 new jobs were added in the private sector. This was much better than expected and October’s number was revised upward by 40,000. The ADP employment index has undershot the government’s private-sector job growth the last four months and we can expect a big number on Friday. ISM manufacturing fell slightly to 56.6, but it was still a good number.

Stocks are rebounding sharply from support SPY 117.50. End of month/beginning of month fund buying is also fueling this rally. I believe we will see positive price action through Friday. In yesterday’s comments, I mentioned that the economic releases should provide a nice rally and this will present an opportunity to lighten up on long positions.

The credit crisis is really starting to heat up and it will keep a lid on the market. In the US, we have a centralized government that in theory can act decisively. Last February, a deficit panel consisting of 18 politicians was formed to address structural debt problems. After 10 months, they still have not been able to nail down the 14 votes they need to draft a proposal. Imagine the difficulty the EU will have controlling deficits in 16 different nations.

Rumor has it that the retirement age will be raised to 69 over the next 65 years. That’s right, 65 years. Our country will go bankrupt long before then and even this 65 year tweak to a broken system is meeting stiff resistance. There is also a proposal for a $.15 a gallon gasoline tax. A study by the Transportation Research Board of the National Academies (2009) estimated a current shortfall of $100 billion for current road improvements. This money won’t cover what we need to maintain our highways, but it will help. Government wages will also freeze, saving us $5 billion per year. With the swipe of a Congressional pen, unemployment benefits can be extended and that will cost taxpayers $60 billion.

There is an old saying that I learned on the trading floor of the CBOT, “You can’t eat like a bird and shit like an elephant.” It pertains to making small trading gains and taking huge losses. Our government is saving nickels and spending dollars. It doesn’t add up and our current “burn rate” is $1.3 trillion per year. This does not include the strain of a national healthcare program. Drastic measures need to be taken immediately and we can’t even agree on a plan that will unfold over the next six decades.

Our national debt is financed with short-term bonds and our average maturity is four years. That means our nation’s interest rate risk is very high because we have to keep rolling our debt over. If we were fortunate enough to finance our $14 trillion with 30-year bonds at 5% (the demand for our 30-year bonds is not strong enough for this to happen), our interest expense would be $700 billion per year. More than 30% of our annual revenues would go to paying our interest.

If we were fortunate enough to finance this it would buy us time. Interest rates are at historic lows and even a small uptick will have dramatic consequences. Interest rates in Europe are starting to jump due to credit risk. This morning, Portugal’s interest rates jumped to new all-time highs. The ECB’s statement to purchase sovereign debt and bailout EU members carries little weight.

The credit crisis is real and it will grow. In 2007, we heard rumblings of a housing bubble. The market suffered huge declines, but it would quickly rebound when there were no dead bodies. Once Countrywide and Indy Mac went under, the tone changed and the market started to roll over. In a matter of months, the crisis spread like wild fire. This global ponzie scheme will continue until a flashpoint is reached.

The ECB will backstop fringe EU members as long as it can. When Spain and Italy join the party, the end will be near. To put this into perspective, Ireland just got $114 billion in aid ($30k per man, woman and child). Spain, a country with a 20% unemployment rate, is ten times as large. The calculation is crude, but we are talking about a $1.2 trillion bailout package just for Spain. Interest rates in Spain and Italy are starting to climb and that is a warning sign.

We hear about all of the fantastic growth in emerging markets every day. China, India, South Korea, Brazil, Russia, Canada, Indonesia and the entire rest of world only comprise 25% of the world’s GDP compared to the US, Europe and Japan. A quarter of the world will not pull the debt laden 75% out of this mess. Emerging markets are dependent on our economy, not the other way around.

Enjoy the rally and use it as an opportunity to lighten up on long positions. I don’t believe we will see new highs this year, but anything can happen as the volume drops off later this month. If resistance at SPY 122 holds firm, I will start selling out of the money call spreads to finance the purchase of long term way out of the money puts. There is no immediate solution to massive deficit spending and that limits the chances for an explosive rally. That is the only scenario that can harm this strategy. If the market inches higher, I should be able to reel in my call spreads without taking too much of a beating. If the market stays flat, my calls will expire and I will own long term puts at a great price. If the market tanks, I stand to make a lot of money.

Look for strong price action today and the rest of the week. 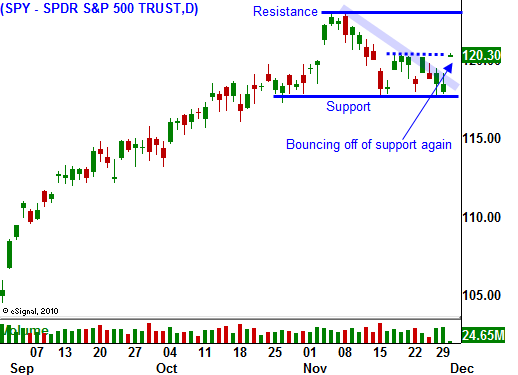