The Highs of the Year Are Within Striking Distance. Big Employment Is Priced In!

After a great round of economic news, the market has been able to forget about the credit woes in Europe. Stocks are surging higher and they are challenging the highs of the year on strong volume.

The good news started when China posted a big PMI number (54.7) yesterday. Even with the government tightening monetary supply, China’s growth continued. Asian markets rallied and that set a positive tone for the rest of the world.

Interest rates in Europe stabilized after the ECB reiterated its commitment to EU members. If needed, it will turn on the printing presses and bail out financially strapped countries. It will also continue to buy sovereign debt. The problem is too big and the ECB will be tested in the near future.

The S&P 500 was posting big gains and then the ADP employment index was released. It showed that the private sector added 93,000 jobs in November and October’s results were improved by 40,000 jobs. This was much better than expected and the stock market had another catalyst. The ADP number has undershot the government’s estimate four months in a row and we are likely to see a strong Unemployment Report tomorrow.

This morning, initial jobless claims jumped slightly to 436,000. Holiday fluctuations made the number look better last week and that understatement evened itself out this week. The four-week moving average is of greater importance than the weekly numbers and it is declining. Corporations are gradually adding workers.

Consumer sentiment was positive this week and Americans are opening their wallets. Black Friday and Cyber Monday were both better than expected. Retailers projected a 3.6% increase in same-store sales for November and revenues actually jumped by 6%.

Economic conditions are improving and the releases have been positive across the board (GDP, Chicago PMI, ISM manufacturing, the Beige Book, initial claims, ADP, consumer sentiment and retail sales). The market also got a boost from end of month/beginning of the month fund buying. This is a very strong seasonal period and the table is set for a year-end rally.

Resistance at SPY 123 will be tested and we are likely to see a breakout on light volume. The credit concerns in Europe are heating up and I don’t believe we will see a runaway rally.

Interest rates in all of the PIIGS countries are moving higher. Spain’s 90-day T-bill rates doubled in a matter of weeks. That is an enormous move on a short-term instrument. Interest rates in Italy have also started to move higher. The ECB’s statement yesterday did little to calm nerves and credit markets did not improve, they simply stabilized for a day.

This scenario reminds me of a cigarette smoker in their “golden years”. Their entire life, people have told them to quit smoking but here they are still standing. They still feel good and they lead a happy lifestyle. Everything seems to be going perfectly, except for that nagging cough. It could simply be a cold, or it could be something more serious.

We all know that this story does not end well. Consumption is our “nicotine” and we are addicted. Europe, the United States and Japan continue to run huge deficits. We are aware of the consequences, but we can’t quit. Between us, we account for 75% of the world’s GDP.

For now, everything is coming up roses. Earnings are excellent, balance sheets are strong, inflation is contained, interest rates are low and economic conditions are improving. If it weren’t for that nagging cough (the looming credit crisis), everything would be perfect.

Heading into the holiday season, we are likely to focus on the good and forget about the bad. Stocks will continue to grind higher until interest rates in Europe signal trouble. We are only a few months away from this flashpoint. From a population standpoint, Spain is 10 times the size of Ireland and a bailout could exceed $1 trillion. It is too big to fail and too big to bail.

Enjoy the rally and lighten up on investments. The time to batten down the hatches draws near. 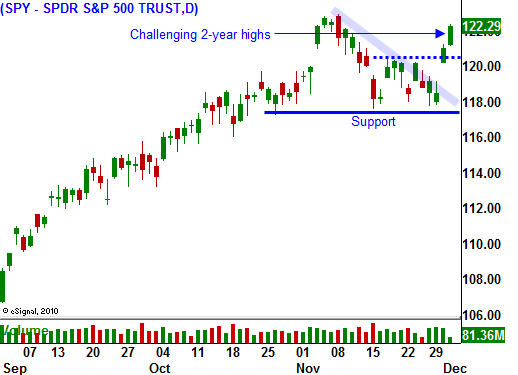