One Foot On The Gas – The Other On the Brake. Look For A Contained Rally.

The market has posted fantastic gains this week. In the last two days, the S&P 500 has surged 40 points and it is near a two-year high. Expectations for a robust employment report were priced in.

Earlier in the week, ADP released its employment index. It showed that 93,000 private sector jobs were added in November and it revised its October estimate to reflect 40,000 more jobs. ADP processes payrolls for small to medium-sized companies and it has undershot the government’s private sector employment the last four months. Analysts were raising estimates for this morning’s Unemployment Report and estimates were in the 150,000 range.

The report was posted an hour before the open and the S&P 500 erased early gains after the release. Non-farm payrolls rose by 39,000 in November and that was much “softer” than expected. The unemployment rate jumped to 9.8% as more Americans reentered the job market. The S&P 500 futures opened six points lower and the selling seems rather contained. The private sector added 50,000 new jobs and the government’s statistics often miss small-business hiring (which accounts for 50% of employment).

In February, an 18 member budget deficit panel was created to solve our nation’s debt problem. Social Security is bleeding our country dry and structural reform is needed immediately. After 10 months, the panel came up with the plan to increase the retirement age from 67 to 69 over the next 65 years. This is comical and tragic at the same time. The proposal is a drop in the bucket and they can’t even get the 14 votes needed to pass this miniscule reform. The US has a centralized government it should be able to deal with these issues swiftly. Imagine the ECB trying to dictate policy to 16 member nations.

Conditions in Europe should stabilize heading into year end. The ECB will be busy buying sovereign debt and that should keep a lid on PIIGS interest rates for the next few weeks. Investors are scared. As they liquidate European sovereign debt, the implied interest rates will climb. Bond auctions will not go smoothly and the demand for new issues had been waning. Structural form is not happening fast enough and austerity programs aren’t even scratching the surface.

The economic news next week is fairly light and it should not have much of an influence on trading. ISM services improved to 55 this morning and that is a good sign since the service sector accounts for 80% of our economic activity.

Momentum and seasonal strength will push the market higher. We are close to testing the highs of the year and one good day will push us through. The breakout will attract bullish speculators and we could see a nice little “pop” on light volume. As long as the European credit crisis is kept at bay, the market will push higher. That means that the backside to this rally will be even nastier when it happens.

In the late 90s, Alan Greenspan spoke of “irrational exuberance”. Tech stocks rallied 50% from that level before they cracked. In 2006, we heard rumblings of a “housing bubble”. The market continued to rally and it made new highs before everything came crashing down. Traders that shorted the market prematurely were carried out in body bags.

One or two events will very quickly lead to a chain reaction. It could be a failed bond auction, it could be a series of interest-rate spikes or it could be a hard line stance by Germany that gets the ball rolling. It is important not to be early. Technical breakdowns will tell us when to get short.

The market has enough ammunition to break out. Stock valuations are cheap, interest rates are low, inflation is contained, economic conditions are improving and emerging markets are attracting capital. Rallies are likely to be very orderly and credit issues will keep the market from getting ahead of itself.

Today’s unemployment number will likely be dismissed as a “one-off” event. Any pullback will represent a buying opportunity and we are likely to see new highs by the end of the year. I may dabble with a few long call positions, but my risk exposure will be very minimal. 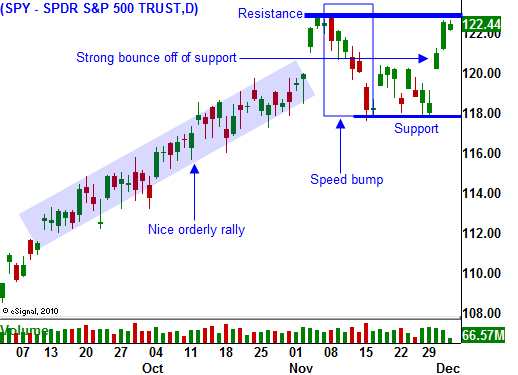