Expect Quiet Trading While the Market Searches For A Breakout Catalyst

Last week, credit concerns in Europe eased and the market staged an impressive rally. Economic conditions improved and prices are within striking distance of a new two-year high.

The nice orderly rally that we saw in September and October was a sign of strength. The market did not get ahead of itself until the post-election “blow off”. Traders did not expect the president to compromise on the Bush tax credits and that breakout prompted a round of profit-taking.

I reference this technical price action because I believe it will be typical of what we see in coming months. All of the puzzle pieces are in place except one. Corporate balance sheets are strong, profits are excellent, valuations are cheap, interest rates are low, inflation is benign, economic conditions are improving and China’s growth is unstoppable. If not for a potential credit crisis, we would be in the middle of a runaway rally.

The market can deal with anything (wars, recessions and terrorism), but it can’t deal with a credit crisis. Once the banking system locks up, companies can’t access funds and even small amount of leverage can be lethal. Investors scramble for cover and they sell assets to generate cash. This vicious cycle turns into panic and valuation means nothing.

From a fiscal standpoint, corporations have acted responsibly. They have managed expenses and they have reduced debt in the last decade. Unfortunately, their prudence has not rubbed off on governments or individuals. The foundation for future economic growth is cracked and massive debt levels will eventually lead to disaster.

Entitlement (Social Security, pensions and healthcare) are crippling the United States and Europe. Workers have paid in a fraction of what they will collect in benefits. An aging population will lead to explosive budget deficits in coming years and politicians are unable to pass structural reform.

The 18 member deficit reduction panel that was established 10 months ago can’t get the 14 votes required to make miniscule changes to Social Security. Their proposal to increase the retirement age by two years over the next six decades was rejected last week. Sadly, even if it were passed, it would not have done enough to avoid a financial crisis.

Imagine multiplying this dissension by 16 and you can appreciate the gridlock in the EU. Each member nation has its own social and economic beliefs and it will be impossible to reach a consensus on anything. Stronger nations like Germany don’t want to finance irresponsible spending. Budget deficits needed to be addressed and the consequences had to be outlined when the EU was originally formed. Now that a crisis is close at hand, it will be impossible to impose new rules.

This market environment reminds me of 2007. The market continued to grind higher and all of the puzzle pieces were in place at that time as well. Earnings were good, the economy was strong, unemployment was below 5% and interest rates were relatively low. Every few months, rumors of a “housing bubble” would shake investors out of the market and then prices would quickly rebound. Real estate prices had never declined in the US and the threat was quickly dismissed.

A financial collapse in Europe and the US seemed impossible until two years ago. The wounds from 2009 are still fresh and investors are not ready to fully embrace this market. Consequently, the rally will be nice and orderly. If stock prices get overextended, profit taking will set in. Occasionally, new information will surface and credit concerns will spark a correction. This pattern will continue until a major event (a sovereign default or three) occurs.

Investors that sat on the sidelines ahead of the tech bubble (1998) or ahead if the housing bubble (2005) missed the biggest part of the rally. Traders who shorted the market prematurely were carried out in body bags. The lesson to be learned is that the market will always move to extremes. It will move higher and lower than you could have ever imagined.

The magnitude of this rally will be determined by the willingness of investors to support this ponzie scheme. When they realize that the EU or the US won’t repay their debt, they will stop lending money. It might take many months to reach that point, but we are getting closer every day. It will start with the PIIGS and it will spread quickly.

China is spending their funny money (Euros and dollars) as fast as possible. They are no longer our largest lender and they are trying to buy assets (corporations, real estate and natural resources). They have been fiscally responsible ($1.5 trillion in foreign reserves) and they do not want to get stuck holding the bag. China’s gold imports increased fivefold last year. Should they become net sellers of US treasuries, our interest rates will jump higher. At a time when the Fed is buying treasuries to keep rates low (QE2), you have to wonder why they have started to rise.

I will play a year-end rally, but my exposure will be very limited. Implied volatilies are falling and this is a good time to buy calls. I like commodity stocks. A weak euro and a weak dollar will make these stocks attractive and the demand for commodities in emerging markets is strong. Look for stocks to move higher into year-end, but be ready at all times to short a major technical breakdown. 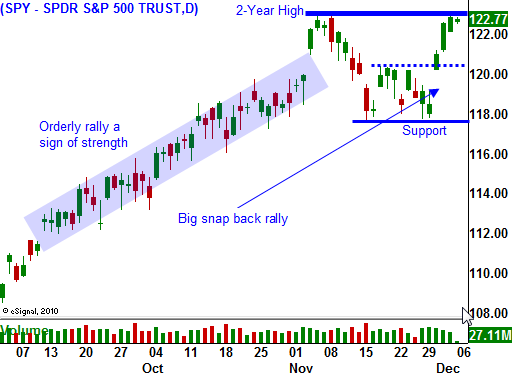