This morning, the market got its catalyst for a breakout to new two-year highs. President Obama struck an apparent deal with congressional Republicans. He is willing consider an extension of the Bush tax credits in exchange for a payroll tax reduction and an extension of unemployment benefits. The market liked the news and stocks are running higher.

This compromise is typical of what we have seen during the last 20 years and it is the reason for our massive deficits. Republicans want lower tax rates and that reduces revenues (no matter what supply-siders say). Democrats want to increase social programs to help lower income Americans and that is increasing our expenses. Both parties are negotiating for more of what they want when they should be negotiating concessions.

In terms of the budget deficit, a fruitful solution would be to increase taxes for most Americans and to reduce entitlement (Social Security, Medicare and Medicaid). This would result in pain for many years, but we might be able to slow down the growth of deficit spending. Not one politician would suggest this since it would be extremely unpopular. The budget deficit panel can’t even get enough votes to increase the retirement age to 69 over the next 65 years.

Social Security is already paying out more in benefits than it receives. This inflection point was not supposed to happen for another six years. As baby boomers retire, they will not be paying into the system, they will be drawing benefits from it. The problem will grow exponentially. Given today’s deal, payroll tax deductions will bring in even less money for Social Security and our deficit will grow.

President Obama placed a wage freeze on all federal employees and that will save us $5 billion per year. I applaud the move since average hourly earnings have been declining the last two years and everyone else has been working harder for less. Unfortunately, an extension of unemployment benefits will cost $65 billion. We can’t go making $5 billion cuts and expect to reduce deficits when we turn right around and spend ten times that amount.

In Ben Bernanke’s 60 Minutes interview, he said that he was very concerned about our employment situation. More than half of the people collecting unemployment compensation have been out of work for more than six months. Historically, these workers lose jobs skills over that time and it becomes increasingly more difficult for them to find work.

If I sound like I have all of the answers, I don’t. The system was flawed many decades ago and we failed to address it.

There’s no stopping this freight train, it is going to crash. Given the choice between a collision today and one five years from now, I would postpone it as long as possible. Our country has had a budget surplus four times in the last 40 years. At its highest point (1999) we took in $225 billion more than we spent. The other three times, the surplus was a fraction of that number. Our national debt has increased from $2 trillion to $14 trillion since then. The Congressional Budget Office (conservative in all estimates) projects that we will run a $1 trillion deficit each year for the next 10 years. An aging America will draw greater retirement benefits and require more health care with each passing year. This is a “double whammy” since they will not be funding entitlement. The point is that we will never work our way out of this hole.

If we slammed on the brakes right now, we would still crash. This fragile recovery would take a nose dive and the double dip could send us into a financial crisis right away. The “tough decisions” that needed to be made had to take place decades ago.

We are all on this ride together and we might as well enjoy the view. The Fed is stimulating the economy, Republicans are letting us hang on to more of our money and Democrats are extending benefits. The market is embracing the news and stocks are making a new 2-year high. Stock valuations are cheap and we should see a year-end rally.

This train will continue down this track as long as investors believe that they will get paid back. When that changes, make sure you have your seat belt on.

The news is rather light this week. Commodity stocks are pulling back on fears that China will increase interest rates. That is very possible since monetary tightening did little to slow down the PMI last week. Inflation in Asia is on the rise, but I feel they will hold off until next year.

The market will have to get through major resistance at this level and the gains will not come easily. Look for a very orderly rally in a quiet market. I still like buying calls on commodity stocks. Oil is above $90 and energy stocks look attractive. Play the upside, but limit your risk exposure. 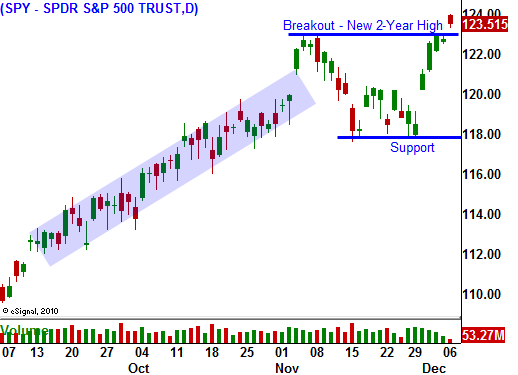