Yesterday, the market reacted to a “deal” between President Obama and congressional Republicans. In exchange for an extension of the Bush tax credits, Republicans would agree to extend unemployment benefits and workers would get a payroll tax break. This news initially pushed the market to new two-year highs, but those gains gradually evaporated throughout the course of the day.

On the surface, this compromise looks extremely bullish. Small business owners (high tax bracket) would keep more profit and theoretically they would reinvest that back into their companies. That would stimulate the economy and new workers would be added. On the other side of the equation, people that are out of work would continue to receive aid and the money they spend will help economy. Workers of all pay grades will keep more of what they earn as payroll taxes are decreased. Everyone wins with this proposal and the party has been granted new life.

This type of compromise is typical of our government. Both sides are negotiating for more, not less. The programs above will reduce revenues and increase expenses. Our national debt is spiraling out of control and politicians will continue to make popular decisions until our nation goes bankrupt. When that happens, they will simply point fingers at each other as they always do. It’s not their fault, we elected them.

The budget deficit panel that was formed 10 months ago has not made any progress. Even a miniscule two year increase to the retirement age that will take place over the next six decades can’t garner the 14 required votes to pass. This is a microcosm of what’s happening within our government.

After such bullish news yesterday, most people would have expected market strength right into the closing bell. A spike in interest rates kept that from happening. In the chart below, you can see that interest rates have reached their highest level since June. After the FOMC announced its quantitative easing program, rates started to climb. QE2 was supposed to lower rates and the opposite has resulted.

There are a few reasons why interest rates can go up and only one of them is bullish (economic growth). Inflation has been benign and while it could put upward pressure on interest rates, it is not a factor at this time. Credit risk could be another reason for interest rates to climb and we have seen that recently in Europe. I believe investors are sending a message to our government and we had better take notice.

Our $14 trillion national debt is financed with short-term bonds. The average maturity is four years and we will continually be rolling that debt over. Every other week we hold massive bond auctions and our interest expense is very sensitive to yield changes. Yesterday’s bond auction went very poorly and rates jumped. The .03% move this week on 10-year bonds has increased our annual interest payments by $42 billion per year. With painstaking effort, President Obama froze government wages to save $5 billion per year and in a couple of days, interest expenses have wiped out those savings eight times over.

In the 1950s, all of our debt was financed by Americans. Now, half of it is owned by foreign investors. Japan and China each own 20% of our foreign debt. Both countries want their currencies to be cheap relative to ours and they are not fans of our quantitative easing program. Neither country has to say a word to protest our actions. They simply have to stop participating in our bond auctions. As the demand declines, the implied interest rates climb. I believe that is exactly what is happening.

If China and Japan are truly angered, they would also become net sellers of US bonds. We continue to spend money when our deficits are already spiraling out of control. The indecision demonstrated by the Budget Deficit Panel sends a clear message to our lenders. We are incapable of making tough fiscal decisions. The compromise reached by the President and Republicans yesterday only reinforces that message.

Interest rates in Germany are also moving higher. They are backstopping all of the PIIGS nations and they are putting their own fiscal house at risk. Investors are demanding a higher rate of return to compensate for risk.

Rising interest rates are market friendly if they are due to economic expansion. Conditions are improving, but not nearly enough to justify the spike in yields. I believe for the first time in my life, rates are moving higher in the US because of risk. This inconceivable to most traders and the market will be able to shoulder the move initially. If we keep making irresponsible decisions, rates will continue to climb.

I still believe we will see a year-end rally, but it will be very contained and orderly. It will take place on lighter volume and it will feed off of positive economic releases. I still like selling out of the money put spreads on commodity stocks. I do not believe China will raise rates before year end.

The current interest rate moves need to be monitored VERY closely. Always have a bailout point. Mine is SPY 120. At SPY 117.50, I go short. 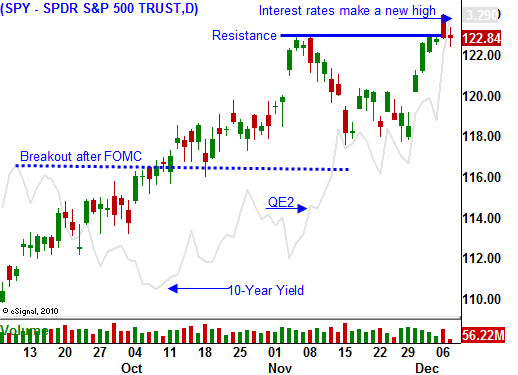