This morning, the market is trying to push higher after overseas markets posted gains. Interest rates have stabilized and the price action is quite.

The market is bumping up against major resistance at the two year high and it needs a catalyst to break out. When President Obama struck a deal with Republicans, it seemed like we had the news we’ve been waiting for. The Bush tax credits might be extended along with unemployment benefits and payroll taxes might be lowered. There is something for everyone in this proposal.

Unfortunately, the plan will increase our budget deficit. Revenues will decline and expenses will increase. Credit markets in Europe are nervous as debt problems spread from country to country. Risk is getting priced into sovereign debt and that might be happening to our debt.

In the last three days, the yield on 10-year US bonds has jumped .3%. The bond auctions did not go well and the demand for US Treasuries was weak. This tiny blip in interest rates will cost our country an additional $42 billion in annual interest expense. Our debt is financed with short-term bonds and our average maturity is four years. We will continuously be rolling this debt over and we are vulnerable to interest rate spikes.

The market tried to break out Tuesday, but it drifted lower the entire day until all of the gains were erased. If interest rates continue to climb, the overhead resistance will build.

Earnings season has ended and the economic news is rather light the next two weeks. Trading activity will slow down during the holidays and that will favor the bulls.

Asset Managers and hedge funds want to “goose” the market to enhance performance. A market rally translates into larger bonuses. Even a small bid in a quiet market can propel it higher.

The credit concerns in Europe should ease and interest rates will stabilize for the next few weeks. I don’t believe China will raise interest rates before year-end. They will be releasing the November inflation number on Saturday and the rumor is that it will come in lower than expected. This outcome would help them hold off on a rate hike and I don’t believe they want to throw a wrench into financial markets during light holiday trading.

Keep an eye on US interest rates. If they stabilized, the market will grind higher.

Heavy equipment manufacturers that generate overseas revenues in emerging markets look particularly strong. Option implied volatilities are cheap and I like buying in the money call options that will move point for point with the stock. This allows me to take profits along the way. The probability of a major decline in the next few weeks is low and that gives me the confidence I need to hold deep in the money options. I have major concerns heading into next year and I am only putting a small portion of my capital at risk.

I always have a contingency plan and you should too. If SPY closes below 120, I will exit all bullish positions. If it breaks below 117.50, I will get short.

Look for quiet trading with a bullish bias. 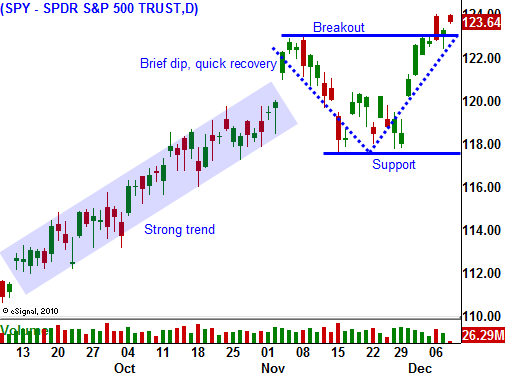