China Holds Off On Rate Hike. Stocks Should Inch Higher Into Year End.

Trading could be relatively quiet the next few weeks. There aren’t many major news events to drive the market and that should bode well for bulls. Momentum and seasonal strength should push stocks to new highs into year end.

The EU continues to deal with Ireland’s bailout and austerity programs/banking reform is being implemented. For now, the market is satisfied with the progress and PIIGS interest rates have stopped jumping higher. The ECB is buying sovereign debt and that has artificially kept a lid on rates.

Major structural reform is required and politicians are incapable of cutting benefits. Austerity programs while necessary, fail to address the biggest source of budget deficits. The credit crisis will be revisited early in 2011.

When politicians fail to act, the market takes over. In Ireland, lenders felt the risk of default was too great so they stopped buying their bonds. Interest rates skyrocketed and Ireland could not secure funding. They had to get bailed out by the ECB/IMF and now reform is forced upon them.

Smaller countries can be bailed out without causing too much chaos. This scene will change dramatically when Spain and/or Italy enter the picture. Germany is the cornerstone to the EU and their interest rates are starting to rise. Traders fear a domino effect and Germany’s credit is starting to deteriorate because they are backstopping the bailouts.

In the US, we have not reached the point where our hand is forced. Our long-standing credibility and status as the reserve currency of the world are helping us tread water. It is inconceivable to anyone that America could be a credit risk. Consequently, we continue on our merry way without any regard for deficit spending.

This week, the President tried to strike a deal with Republicans. Instead of negotiating which taxes will go up and which programs will be cut, they agreed to a sweet deal where tax revenues decline and benefits increase. Our idea of austerity is to freeze government payrolls to save $5 billion per year and then to extend $50 billion in unemployment benefits. The market has not forced us to take austerity seriously, so we don’t.

Structural reform is much more difficult to agree on and it will only happen if we are on the verge of bankruptcy. After 10 months, a panel of 18 politicians could not agree to raise the retirement age by two years over the course of six decades. This clearly demonstrates our inability to cut spending. Social Security reform needed to happen decades ago. We couldn’t do it then and we can’t do it now.

Interest rates in the US jumped .3% this week on 10-year bonds. That increases our interest expense on the national debt by $40 billion per year. The Fed is buying US Treasuries (QE2) and interest rates are supposed to go down, not up. This could be a warning sign and we had better get serious about our deficits. Once market forces take control, it’s too late.

I mentioned in yesterday’s comments that China would not raise rates this year. They increased bank reserve requirements by .5% and that is a much milder way to tighten. This is a “market friendly” news item.

I still believe that the market will inch its way higher in quiet trading the rest of the year. Buy calls on stocks that have broken out above resistance and continue to move upward. The probability of a big decline is minimal and I am buying in the money options. As stocks grind higher, I will take profits. Option premiums have declined substantially and put credit spreading does not provide an adequate reward.

Keep your positions relatively small. I will not have more than 20% of my capital at risk into year end. If my forecast plays out, I will still make decent money. Should the SPY drop below 120, I will exit all bullish positions. 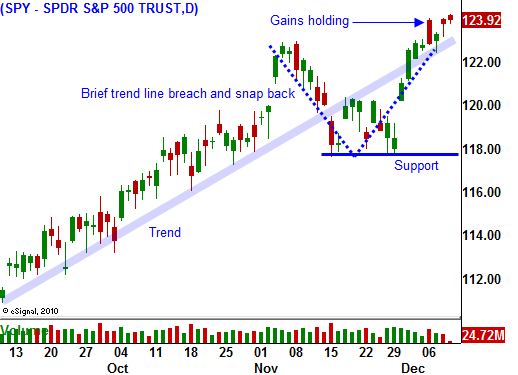