Yesterday, stocks tried to push higher early in the day but buyers didn’t have enough conviction to hold the gains. As the day wore on, prices slipped and the market finished unchanged. After a 20% run in three months, stocks are taking a breather. It is important not to interpret this as a sign of weakness.

Year end strength is a powerful force to fight. When the volume dries up around the holidays, even a small institutional bid can push stocks higher. As I have been saying for weeks, all of the puzzle pieces are in place for a massive run-up except one. Credit concerns are keeping a lid on this rally and if not for massive debt, this market would be off to the races. Credit concerns are not going to be an issue during the next few weeks and stocks will grind higher.

As I mentioned yesterday, the ECB will be buying PIIGS debt with both hands. Portugal held an auction today and yields jumped less than expected. The bid to cover was just under two. On the surface, the news was good. However, a closer look reveals that its borrowing costs have doubled in just a month. This was a small €500 million auction and the ECB was able to mask underlying weakness.

The market can deal with wars, terrorism and recessions, but it cannot deal with the credit crisis. This may only be one puzzle piece, but it is a very important one. As larger nations require bailouts the problem will be much more difficult to solve. Interest rates in the US and Germany are on the rise and I believe risk (not economic growth or inflation) is the catalyst.

The FOMC statement yesterday and the economic news this morning have had little impact on the market. CPI was lower than expected, Empire Manufacturing was better than expected and industrial production improved. Initial jobless claims will be the most important number of the week. The four-week moving average has been declining and that is a positive sign. Seasonal employment and holiday adjustments will affect the number and it is difficult to predict this time of year. Analysts are expecting 425,000 new applications and any number below that will be “market friendly”.

With the market at new two-year highs, option expiration buy programs could push stocks higher. If traders sense a persistent upward move, they will leg out of hedged positions throughout the day, goosing the market higher. The early action feels conducive for this maneuver.

I do not believe we will see a large blow-off rally in the next two weeks. There are too many concerns for that to happen and traders will be eager to take profits if the market gets ahead of itself. Look for a nice orderly rally on light volume.

Focus on commodity stocks. They will benefit from a weak dollar and from emerging market growth. I am buying in the money calls on these stocks and I will take profits along the way. My risk exposure is very limited and my goal is to be in cash by the time January rolls around. If the price action looks particularly heavy and interest rates continue to move higher, I might purchase very long-term out of the money puts during the last few trading days of the year.

It is foolish to try and short this market right now. If you can’t embrace this rally, stay on the sidelines and be patient. A technical breakdown below SPY 122 will be your first entry level for put buying. Stocks that have not been able to rally with the market in the last three months will roll over quickly once the selling starts.

Look for a nice steady grind higher this week. 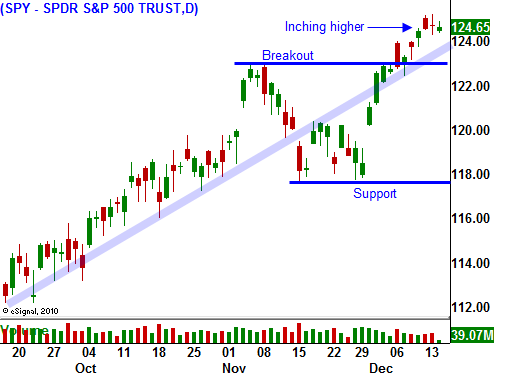