The Seas Are Calm – Smooth Sailing With A Very Light Wind

Market conditions have not changed much in the last 24 hours. Decent economic news is providing a nice tail wind and stocks continue to push higher. Year-end strength and option expiration buy programs will keep the momentum going this week.

This morning, retail sales came in much better than expected. They rose .8% and the National Federation of Retailers raised their forecast. This news more than offset negative earnings from Best Buy. A loss in market share (not overall electronics demand) is to blame for the poor performance. Business inventories were “market friendly” and sales rose 1.3%. The PPI came in “hot” at .8%. Normally, this might have sparked concern, but the Fed wants prices to rise. They believe disinflation/deflation is a greater foe.

This afternoon, the FOMC will release its statement. Ben Bernanke clearly outlined his agenda on 60 Minutes last week. He feels that this economic recovery is very fragile and he defended quantitative easing. I don’t believe we will see any change in rhetoric. This will be a nonevent.

The remaining economic releases the rest of the week (CPI, Empire Manufacturing, industrial production, initial claims, building permits, the Philly Fed and LEI) will provide a positive backdrop for the market. These releases have not typically been huge market movers. Jobless claims have been declining in the last month and the four-week moving average is trending lower. This is positive for the market and initial claims on Thursday will be the next significant number.

Spain and Portugal will hold bond auctions this week. I am expecting the ECB to actively participate and that should stabilize PIIGS interest rates. The ECB disclosed yesterday that it purchased €2.7 billion worth of bonds last week and that was up from €2 billion the week before. They are increasing their participation to prop up prices. European credit concerns will be an issue early in 2011, but they won’t interfere with this year-end rally.

The problems in Europe are festering. The Italian Prime Minister (Berlusconi) narrowly escaped a no-confidence vote. Their debt is enormous and interest rates are moving higher. The country will be faced with tough decisions and this vote (314/311) shows that it will be tough for him to cut deficit spending. Belgium’s bond rating was lowered by Standard & Poor’s. They are officially on the sovereign debt radar. The ECB is aware of the warning signs around them and it wants to increase the bailout slush fund. It will ask EU members for more money in the near future.

The opposing market forces will lead to a nice orderly rally into year end. Excellent earnings, strong balance sheets, low interest rates, improving economic conditions, growth in China and QE2 are providing the strength. Rising interest rates and credit concerns in Europe will keep the rally in check. If prices get ahead of themselves, profit-taking will result. Until we reach a flashpoint, we can expect this pattern to continue.

If rates throughout Europe suddenly spike in many countries at the same time, a massive correction will be near. It appears that the ECB will try to bailout every country until member countries stop contributing to the bailout fund. We probably will not see a sovereign bankruptcy. They will all march closer to the edge of the cliff together.

Keep your size relatively small, but trade the rally. Buy deep in the money call options on strong stocks. Gradually take profits along the way and try to be out of long positions before January. 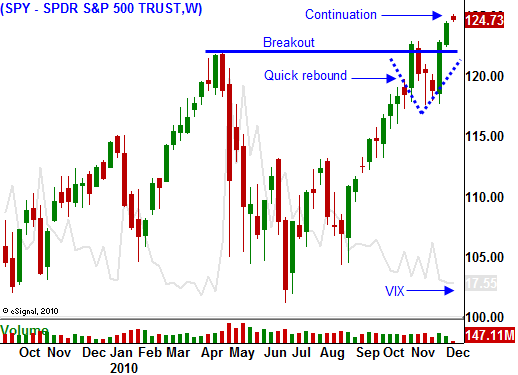