Stock prices during the last week have not moved higher or lower. They are caught in a tight range and the market is searching for its next driver.

Trading volumes will decrease heading into the Christmas. There are only four trading days next week and seasonal strength should fuel a small rally. A small institutional bid in a quiet market will push stocks higher.

The Bush tax credits will be extended and Congress agreed to Obama’s tax deal. The margin of victory was large (277-148) and the entire package will cost $858 billion. Massive debt created our current problem and apparently more debt will solve it.

In the not-too-distant future, it will be blatantly obvious that we will never balance our budget. I’m not talking about paying back our debt; I am talking about treading water with a $14 trillion monkey on our back. Our tax revenues won’t even cover Social Security, Medicare and interest in a couple of years.

In the last two weeks, interest rates spiked .5% on 10 year bonds. This increases our interest expense by $70 billion per year. Half of our borrowing comes from foreigners. They will be busy funding their own deficits and holding their own auctions. That means they won’t be inclined to buy our bonds and our respective auctions will be competing for capital. That means interest rates will rise.

Let me keep the math as simple as I can. Next year we will pay about $800 in Social Security benefits, $500 billion in Medicare and $300 billion in Medicaid. These numbers can be accurately forecasted. Our nation debt is projected to grow to $15 trillion. If interest rates rise to 7%, our expense will rise to $1 trillion. Our tax revenues of $2.4 trillion won’t cover these 3 expenses. Granted, interest rates would have to spike dramatically, but I am not taking about 10 years from now, I am taking about 2011.

If this were to happen, we would be out of money. Imagine cutting Social Security payments or reducing healthcare for the elderly. Imagine not paying our interest on time. Not to worry, we will just print more money.

If you think that 7% interest rates are impossible, look at what happened in Greece, Portugal and Ireland in the last 3 months. If fear sets in, rates will spike. Our average maturity is 4 years and we have to keep rolling our debt. That is why we hold massive auctions every other week. By keeping our maturity short term, we have been able to mask our interest expense liability. Our nation is VERY exposed to rising rates.

Our debt has rocketed to unimaginable levels in just 10 years. Social Security/Medicare/Medicaid payments will increase dramatically in coming years as baby boomers retire. I have not even addressed the other $1.5 trillion we spend regularly each year on defense, homeland security, transportation, education, justice department, agriculture, veteran’s affairs and other vital programs.

At 15%, we can’t make our interest payments. That also seems impossible until you look at where rates were in the early 1980’s.

Like Europe, we are treading on very thin ice. One slip could spell disaster.

I know the big hurt is coming; I just don’t want to be early. Traders that predicted the tech bubble in 1998 were carried out in body bags before the market finally rolled over. The same was true for the housing bubble in 2007. Stocks reached a new all-time high in 2007. Option implied volatilities are low and this is not a bad time to at least take a small position in very long term put options (LEAPS) that are way out of the money. Companies that rely on cash flow and have heavy debt burdens are good candidates. Airlines would be one example.

This rally will continue into year end, but this $850 billion package combined with rising interest rates makes me very nervous. The ECB is busy trying to structure bailout policies and they know they are in the middle of a crisis.

Keep your size small and hold deep in the money calls on strong stocks for another 10 days. Go to cash by year-end. 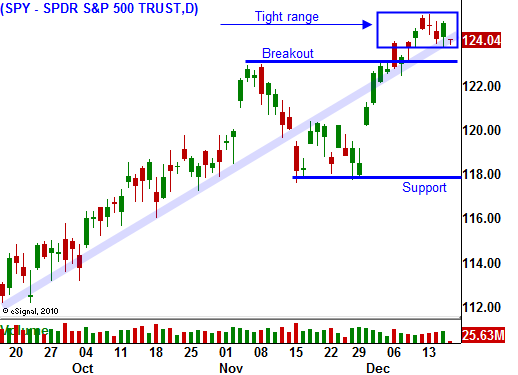