ADP Reports The Biggest Jobs Growth – Ever. This Will Attract Buyers.

This morning, the ADP employment index showed that 297,000 new jobs were added to the private sector in December. This is the highest reading ever recorded by the firm and it blew away estimates. The ISM services number was just released and it beat estimates at a reading of 57. These two numbers should have sparked a massive rally and they did not.

As I mentioned yesterday, good news is not packing much of a punch. Bullish sentiment is off the charts and speculators need to be flushed out.

The strong employment number will prompt analysts to raise estimates for Friday’s number. If more than 200,000 new jobs were added in December, the market should march higher. There will be some concerns that the Fed will stop easing and that will put upward pressure on interest rates. Higher interest rates are not a problem as long as they are tied to economic growth. We need jobs for sustained economic growth.

In Europe, interest rates are moving higher due to credit risk. Portugal auction €500 million in six-month bills and the rate doubled in a month. This is a monumental jump for short-term debt. The conditions in Europe are tenuous and weakness overseas is casting a dark cloud on our market this morning.

The EU is drafting a proposal where senior debt holders take a haircut before bailout money is granted. Germany has been pushing for this and they do not want to get stuck paying the bill for everyone else’s mistakes. As long as the problems are relatively small, a consensus can be reached. When large members like Spain and Italy enter the picture, the scene will change. These countries are too big to bail out and they will fragment the EU.

The bailouts are only a temporary solution. Without structural reform, countries will be in the same situation in a matter of years. The same is true in the US where states are running massive deficits. Pension plans and health care benefits for retired public workers are draining budgets. Unfortunately, structural reform will not happen until it is forced.

The news today was very positive and it was much better than I expected. Consequently, I don’t know that we will see much of a decline. Stocks could tread water in a tight range and then explode higher once earnings season begins.

The ADP number has impacted my approach. I was going to wait for a pullback to get long and I don’t think we’ll get one. Consequently, I will start selling out of the money put credit spreads on commodity stocks today. I will keep my size relatively small ahead of Friday’s number. If more than 200,000 jobs were added in December and the market is breaking out, I will buy in the money calls.

Look for a steady grind higher into the close today. 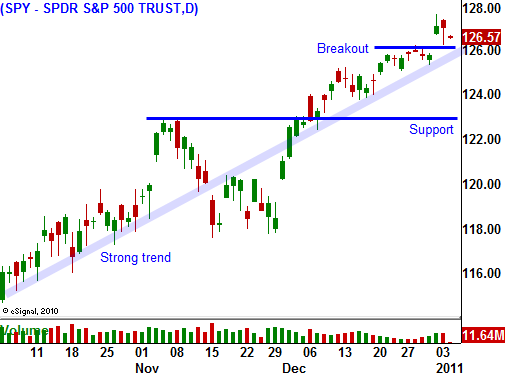