Nice Start To The New Year!

The market is starting off the year on a positive note. After trading in a very tight range, stocks have broken out to a new high.

China released its PMI and it fell to 53.9. China’s markets are closed today, but the news should not spark selling. Tighter bank reserve requirements and higher interest rates were expected to slow down economic activity. The reading was still strong.

There have been a number of brokerage upgrades this morning and a Russian investor took a $500 million stake in Facebook. That gives it a market value over $50 billion.

Tomorrow, factory orders, auto sales and the FOMC minutes will be released. These events should be “market friendly” but I am not expecting a big move off of the news. Wednesday, ADP employment and ISM services will be released. Those two numbers should also be positive and they do have the potential to push the market higher. On Friday, the Unemployment Report will be released. Initial jobless claims have been dropping the last four weeks and that bodes well for jobs. Analysts are expecting 140,000 new jobs. A good jobs number is priced in and I don’t believe we will get a big pop unless we gain more than 200,000 jobs.

Earnings season is right around the corner and stocks typically start rallying two weeks ahead of the announcements. Consumers are spending and earnings should be strong.

PIIGS will be auctioning €80 billion in bonds during January. Euro debt is a potential spoiler down the road, but I don’t believe it will be a factor in January. The ECB has enough money to support the bond auctions and China said it will continue to buy Spanish debt. That is critical since Spain is too big to fail and too big to bail. It is a domino that could start a credit crisis and we will see how anxious investors are to keep it standing.

Stocks want to move higher and the only thing holding them back is a potential credit crisis. Bullish sentiment is extremely high and I feel that the market is vulnerable to a quick pullback. That move would flush speculators out and it would set up a nice buying opportunity.

I am starting the year off in cash and I want to wait for that pullback. Commodity stocks are extremely strong and that is where I will put my money to work. I’ve missed today’s rally and I am not going to chase stocks. Good news is priced into the market and that means any surprise will come on the downside. Be patient and wait for an opportunity. 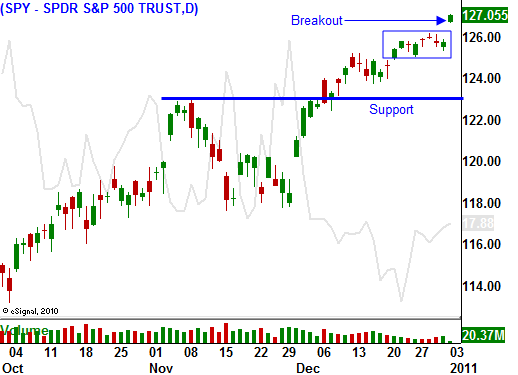